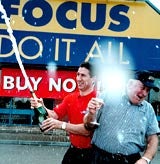 Focus Do It All is understood to be reviewing its £7.2m media and creative accounts.

The move comes just two months after a review of agency arrangements for retailer Wickes.

It is understood that BDH TBWA has been asked to repitch for the Focus Do It All creative account. A number of agencies have also been approached to pitch against incumbent Media Insight – a MindShare subsidiary.

Focus Do It All refused to comment, although earlier this year it said its agencies would not automatically pick up Wickes’ business.

Focus bought Wickes in September for £289m. The company had said it would not consolidate the business. Retail Intelligence analyst Bryan Roberts says: “It will be difficult and foolish to consolidate the brands although there is room for some synergy between the two.”

Wickes aims at serious DIY enthusiasts while Focus concentrates on the softer end of of the market.