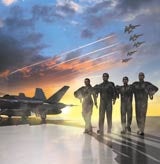 It would be a turning point in gender politics. If Mary Minnick, Dawn Hudson and Susan Arnold play their cards right, they could be in line to become top guns at three of the world’s biggest brand owners. Imagine Coca-Cola, PepsiCo and Procter &amp; Gamble respectively all being run by women.

The three rising stars have recently been promoted to leading positions in their companies and some believe they are being fast-tracked in preparation for becoming chief executive officers.

But there are many boulders strewn across their career paths, and instead of being trained for the hot seats, they could find themselves in ejector seats. It is a small jump from corporate queen to desperate housewife. When it comes to securing the top job, the big question is how to make sure you are appointed, not disappointed.

They could end up like Claire Babrowski, the McDonald’s restaurant chief who was touted to become the company’s first female chief executive, but lost out in the tumultuous succession scramble that gripped the organisation last year. She left the fast-food chain in December after 31 years with the company.

Choosing a successor-in-chief is one of the most important decisions made by any organisation, whether it is the cardinals in Rome selecting the next Pope or the United Kingdom wondering if the anointed successor is up to the job of King.

However, the heads of multinational corporations no longer take promising 21-year-old graduate recruits to one side and tell them “One day, this could all be yours”, as this environment no longer exists.

The stripping out of middle-ranking executives has left the question of succession wide open. There was a time when future leaders were carefully groomed, but today the top job often goes to an outsider. For instance, computer giant Hewlett-Packard appointed Mark Hurd from NCR last week to replace Carly Fiorina as chief executive. As Peter Hogarth, head of change partnership at headhunters Whitehead Mann, says: “It is implausible to suggest that nowhere in the senior management at the company was there a potential leader.”

He believes companies often choose outsiders as leaders because the appointment and remuneration committees use professional headhunters to undertake the search. Their role is bolstered by hiring externally – bringing in a chief from outside may mean the new boss will look to recruit more external talent for board roles. The same headhunter may be favoured in the second level of searches. “Even where you have got a strong internal candidate, most committees are running scared of appointing without doing an external search,” he says.

Even so, traditional marketing companies such as Coca-Cola, P&G and Unilever have stuck to the classic model for succession management, promoting from within and fast-tracking likely candidates up the ranks of the organisation. The hopefuls have to jump through hoops to prove their suitability – with a stint heading an Asian business often being a crucial step. They have to fill a senior sales position, a top marketing role and are often required to take a financial job as well.

Perhaps with this in mind, Coca-Cola boss Neville Isdell has sparked the biggest shake-up at the company since he was appointed chief executive last May, with the creation of a new role for Asia boss Mary Minnick. She will head a new function co-ordinating marketing, innovation and “strategic growth paths”. Reporting to her will be chief marketing officer Chuck Fruit and innovation chief Danny Strickland.

It is the first time a woman has held such a senior position at the company. Isdell says Minnick’s experience in Japan and China make her “uniquely suited” to the role. “During her 21-year career at Coca-Cola, she has developed expertise in successfully building brands through the combination of effective sales, marketing and new product launches. Mary has a proven track record,” said Isdell, which sounded as if he was anointing her for greater things to come.

Reaching for the stars

PepsiCo followed suit last week with its own senior shake-up, expanding the role of Dawn Hudson, head of Pepsi Cola in North America, to include all beverages distributed through its bottler network. Meanwhile, John Compton, vice-chairman of snack food arm Frito-Lay, takes on responsibility for Quaker Foods, Tropicana juices and Gatorade sports drinks in North America. Both are described as rising stars within PepsiCo. Moving up another notch may be indicative of their future paths.

Some of those touted as future chiefs may decide the sacrifice of moving round the world in different jobs is too great. P&G president of Europe Paul Polman, who had been tipped to rise to the top of the company, is retiring in June at the age of 49 for “personal reasons”. One observer comments: “Who wants to spend three years working in Azerbaijan?”

At Unilever, the appointment of Patrick Cescau as successor to Niall FitzGerald earlier this year (MW February 17, 2005) had been planned for some time, according to observers. One analyst says the company has “a civil service attitude” to succession. “They do plan these things a long way out. The executives go up through a fairly restricted route, the finance director job often goes to one of the potential candidates, and they get a go at running a large chunk of the business,” says the analyst.

“Once you get to a certain level within Unilever, you are told you are one of the top 50, then the top 25, top ten and then the top five,” he adds. He imagines that the future chief executive is tapped on the shoulder by some shadowy figure who whispers in their ear: “You are the One.”

One source says he was confident that Ralph Kugler, president of home and personal care, would be a future Unilever chief executive, but now he is not so sure. Kugler’s profile of jobs, spanning regional and national management as well as branding, indicate a breadth of experience that could make him suitable. But this has changed in recent months, with profits sliding and the end of the dual chief executive system closing down opportunities.

The observer notes the youthfulness of some of the corporate bosses being put in place compared to ten years ago, when they would have been in their mid-50s before taking the big one. Publicis chief executive Grant Duncan says that this is partly down to the exceptionally public nature of being a chief executive of a listed company: “The scrutiny is so great that if you fail, your failure is played out in public. A lot of the great talent is going into private equity where you can get on with it quietly.”

Even so, brand owners are considered to be among the best companies when it comes to bringing home-grown talent up through the organisation. For instance, it is inconceivable that P&G would look outside for a chief executive. “That is one of their strengths and it is a good thing – they want continuity,” says London Business School professor of organisational behaviour Nigel Nicholson. “It is companies looking for transformation that go outside, they think those inside won’t have freshvision,” he adds.

But, he says, it is wrong to assume that an insider cannot be revolutionary within an organisation – he points to former Coca-Cola chief Robert Goizueta, who sold off the company’s bottling interests to help transform the organisation.

Keep it in the family

According to Leo Burnett group chief executive Bruce Haines, who has worked closely with clients P&G and McDonald’s, the idea of senior management teams at these businesses stabbing each other in the back as they fight for the top job is an exaggeration. “From the outside, people can over-complicate what it is like to work at P&G and McDonald’s – both companies are very relaxed, they are almost like family businesses at the top. The executives have all grown up together, everybody knows everybody and it becomes clear who the future bosses are going to be. It is quite transparent.”

But McDonald’s had a torrid time last year. In April, chairman and chief executive Jim Cantalupo died of a heart attack while attending a convention for franchisees. Two weeks after Charlie Bell was announced as his successor, he revealed he had colorectal cancer. Bell, who is in his mid-40s, resigned in December because of his continuing battle with the illness. When the company named vice-chairman Jim Skinner as chief executive, Claire Babrowski, head of restaurant operations, who had been tipped as a possible boss, resigned.

In many companies, executives will be wondering how long they have to wait before getting the top job, if they get it at all. Cadbury Schweppes has appointed president of the Americas confectionery division Matt Shattock as president of Europe, Middle East and Africa, a role considered to be third in line to the top job (MW February 23).

At Asda, 40-year-old Andy Bond has taken the chief executive’s role, replacing Tony DeNunzio, who is leaving to head Dutch retail group Vendex. Bond was chief operating officer, a role an Asda spokesman acknowledges is a stepping stone to the number one slot. That job is vacant, but whoever is appointed will know they are close to being Asda’s top gun.

More than ever, there is everything to play for in the battle to be chosen for the top job, whatever the organisation. And if you don’t make it to the top in your own company, there are plenty of rivals worth considering.