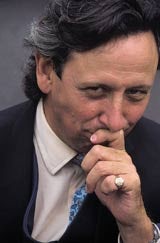 Industrial and media magnate Silvio Berlusconi’s presidency of the European Union (EU) promises to be nothing if not colourful. We Northern Europeans make the chambers of the EU cripplingly boring and it takes an Italian to grab the microphone and make us listen at last to proceedings in the European Parliament.

I’m on dangerous ethnic ground here, but I would like to offer Berlusconi some small defence for his ill-judged comparison last week of a German MEP to a concentration camp guard.

For a start, Berlusconi didn’t claim that Martin Schulz – as has been widely reported – was like a Nazi. He said Schulz could play the part in a movie. This has a different implication – that Schulz was acting like a Nazi, not that he was one.

I accept that this is a fairly fine distinction and it was still an offensive and tasteless insult. But there is a distinction never the less. I believe there is a difference between calling someone a fascist and saying they are behaving like one.

I have a second point – and I’m probably on even dodgier prejudicial ground here. Basil Fawlty’s “don’t mention the war” syndrome seems to have achieved the level of a taboo with regards to Germany.

As I say, Berlusconi’s jibe was inappropriate and hurtful, but it wasn’t racist – concentration camp guards came from many ethnic origins. Yet there is something particularly verboten about reminding Germany about its fascist past.

This may be because the Second World War is still a relatively recent and raw memory – I doubt whether Berlusconi would have hit the front pages if he had compared Schulz with, for instance, Attila the Hun or Vlad the Impaler. But I think there’s more to it than that.

Just suppose that Schulz (who I don’t suppose would dream of such a thing) had said that Berlusconi could have played the part of one of Mussolini’s henchmen in a movie. Would there have been the same outraged response from Italy and demands for an unreserved apology?

I doubt it. You might argue that this is not such a bad insult, but that is a question of degree. In both instances, there is the charge that the individual is behaving like a fascist thug. The German, however, is entitled for some reason to take greater offence.

This issue has implications for the ways in which European countries interact and trade as they move further into economic and political union and, wider afield, for the concept of globalisation itself, in the sense of multinationals operating common corporate policies worldwide.

The Financial Times ran a thoughtful leader last weekend, in which it pointed out the incompatibilities between national senses of humour. To Berlusconi, his remark was “irony”, while to Germans and many other Europeans it was a tasteless insult.

I don’t buy the irony line. It isn’t ironic that Berlusconi believes Schulz could play a concentration camp guard. It’s hideous. Italian claims on irony are a smokescreen, as effective as Alastair Campbell’s claims that the BBC is a bunch of liars.

But there is a very basic disconnection between what the Italians think is an acceptable international language and the solemnity of Northern Europe. This is a worrying phenomenon for anyone with hopes for the development of an effective lingua franca for international trade.

The FT recommended the “European Commission should start work at once on a harmonising regulation, complete with a list of officially approved euro-jokes, a set of minimum mirth standards and the legal tools to enforce them.”

The problem is surely underlined by the likelihood that, in some Teutonic quarters, the FT’s line would be taken seriously. There may be someone drafting such a directive as I write.

What hopes can there possibly be for a federal Europe, let alone a global market, when such cultural differences become apparent? We bang on about European federalism being a cultural melting pot, but it takes a Berlusconi to point out just how incompatible its constituent cultures remain.

Fortunately, there is an answer. The common language of the world – the lingua franca for all nations, as it were – is money.

We only have to look around us in any given week to see how the language of money transcends local politics – even how it over-rides cultural principles. Fascinating to note then that, according to a survey from financial data house Citywire, the UK’s largest cigarette manufacturers – British American Tobacco, Imperial Tobacco and Gallaher – occupy the top three places in a league table of 30 leading asset managers’ favourite FTSE stocks.

What price ethical investment? I would also note that President George Bush is this week being welcomed across Africa, on a whistle-stop tour of five countries there. This welcome springs not from any admiration of the American super-power itself: the US is despised across the continent for its corporate imperialism, not to mention its history of slavery.

It has rather more to do with a 50 per cent increase in US development aid, an extended arrangement for trade facilities covering an annual $9bn (£5.6bn) of African exports to the US and a $15bn (£9.4bn) plan for the prevention and treatment of AIDS – the largest single budget ever employed for fighting one disease.

Money is the one true language of the world. And it talks. The real irony is that it’s also a language that Berlusconi speaks fluently.