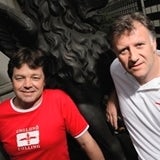 Two England football supporters are launching a SIM card they claim can save Germany-bound England supporters &£23m in call charges this summer.

Called England Calling, the card is a unique mobile phone SIM card that does not incur international call roaming charges. The card will cost &£29.95 but will enable anyone travelling to Germany this summer – or indeed to 106 other destinations abroad – to make significant savings on their mobile phone bill.

Chris Lightfoot and John Owrid say they came up with the idea of a roaming-free SIM card after receiving “astronomical” mobile bills from their time in Portugal watching England play in Euro2004.

Using the England Calling SIM, a typical conversation between fans fixing a time and place to meet before a game could cost as little as 97p compared with a charge of &£6.20 on a conventional pay-as-you-go tariff. If the 100,000 England supporters travelling to Germany in June used England Calling SIM cards for just two weeks, the total saving would be up to &£23m.

England Calling says: “Fans will need to use their phones to meet up, they may want to phone mates back home to describe what they are seeing or they may just want to phone loved ones at home each evening to say goodnight.”

Vodafone, T-Mobile and O2 have agreed under pressure from consumers and the European Commission to slash the cost of mobile use overseas from July. Orange had already said it would cut its costs by 25% this summer.