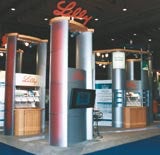 Setting up an exhibition has been described as an exercise akin to having several dozen building sites working under one roof. But while a building may take weeks or months to construct – and the deadline is often missed anyway – exhibition organisers usually have little more than three days to put up their stands and turn a vast, empty hall into a lively, crowded space. And falling ladders, failing electricity generators and the strange case of the three-legged house are just a few of the hazards involved with setting up an exhibition.

Constructing stands – sometimes with two floors – can involve dozens of contractors and subcontractors. The movement of heavy building materials and platforms presents significant hazards. Getting stands set up and supplied with electricity, technology, lighting, water, carpet and furniture – plus graphics and branding – is a complex process.

In one case, a show house that was supposed to be supported by four legs had lost one of the supports in transit. The contractors decided to put it up anyway, but safety officials at the exhibition centre declared it unsafe and the contractor was forced to sit down and think hard about how to rebuild it safely. Had it collapsed, the exhibitor would have been liable.

Every activity involved in exhibiting is covered by contracts, service level agreements and schedules. Nothing is left to chance, and venue owners, exhibition organisers, contractors and the exhibitors themselves are buried in a thicket of bureaucracy.

Part of the problem is the sheer number of tasks that need to be completed to get an exhibition up and running. Things can go badly wrong – in one instance, the generators failed and a whole exhibition was plunged into darkness, as there was no substitute generator – and when they do, it is essential that there is a clear chain of responsibility. Construction accidents are also common, so all parties must have established health and safety procedures.

In the eyes of the law, the exhibitor is usually considered to be the employer if an electrician, builder or carpenter is involved in an accident – even if he or she works for a contractor. So exhibitors need to undertake a risk assessment and prepare a “method statement”, setting out the work they will be undertaking. This is primarily designed to avoid accidents, but also covers the exhibitor in the event of any damaging legal action if an accident should occur. One exhibition organiser found itself in the spotlight after a worker was injured by a falling ladder. But, as it had undertaken a full risk assessment before work began, the Health &amp; Safety Executive considered that the company had paid due care and attention to minimising the risks.

There is a bright side, however: “Organising contractors doesn’t have to be a minefield,” says Reed Exhibitions exhibition organisation manager Heidi Innes. “There is plenty exhibitors can do to pre-empt the problems.” While organisers such as Reed recommend that exhibitors use their approved contractors, which do everything from building platforms and erecting stands to providing services and furnishings, some exhibitors insist on using their own people. This can amplify the air of confusion which often arises when an exhibition is being put together, since it increases the number of different contractors involved. But it also loads extra work onto the exhibitors, which must cover themselves legally.

Innes advises exhibitors which use their own contractors to make sure that all contracts, agreements and safety standards are prepared well in advance. But she says that a recommended contractor can provide a good level of service and save the exhibitor work. “We make sure that our contractors have a service desk in the exhibition hall. That way, if the exhibitor orders something and it doesn’t arrive, there is an easily available point of contact,” she says. Reed also makes use of what it calls call “spocs” – single point of contact advisers – who are attached to exhibitors’ teams and can help them to ensure everything is going to plan and all the items stipulated in their agreements are provided.

Reed uses well-known contractors such as Melville, Opex, Early Action Group and Stanco to provide a range of services such as stand fitting and providing electricity, furniture and secure fittings. Innes recommends that any exhibitors contemplating doing it themselves should use contractors which are members of the British Exhibition Contractors Association, a trade body that provides some protection if things go wrong.

Innes says it is essential for exhibitors to work closely with contractors, because any problems need to be thought about and solved on the spot. As the contractors have teams of skilled workers, they can usually come up with solutions for most problems. In addition, structural engineers and safety officers will be going round the exhibition checking that everything is being done correctly and safely, so the contractors need to be flexible in the event of any problems.

Covering your back is all very well, but some people feel the industry has become swamped by legal red tape, making it less flexible and creative – and more complicated for everybody involved. John Hooker, director of event management at BI, which he describes as “a business improvement consultancy which is involved in exhibitions”, says: “Contracts are becoming less user-friendly and more technical. What was settled with a simple handshake years ago is today completely formalised. The UK is becoming increasingly litigious and this, coupled with the health and safety edicts from Brussels, means contracts are becoming very much a tool for protecting the parties.”

Hooker muses that perhaps it would be better to return to the days when formal contracts were not widely used. In one recent example, a car company in southern France tore up the idea of contracts altogether when it mounted an exhibition. Everything went perfectly, and much time and money was saved in the purchasing department and on solicitors’ fees.

Many in the industry, however, insist that a watertight contract is well worthwhile and can save time and trouble in the event of problems. While the exhibitor holds the organiser to its contract, the organiser has to sign an agreement with the owner of the exhibition space. Peter Tudor is director of sales and marketing for Wembley Arena Conference and Exhibition Centre, where exhibition organisers have had to sign complex contracts since the venue first opened. “Ours is a thorough contract: it needs to be, because of all the factors involved. In an increasingly litigious society everybody needs to know where they stand,” he says.

Wembley’s contracts can run to 30 pages, and Tudor emphasises the importance of going through them carefully, so that clients understand their liabilities and responsibilities. Alongside the contract, Wembley issues a general instructions booklet for each event, setting out all the details from opening and closing times to the provision of essential services. But Tudor reiterates: “It is important for everybody to understand exactly what they are getting. If you don’t have a contract, you can’t go back and say: ‘You were supposed to provide so and so.’ The contract sets down in writing what is expected of the event.”

‘But I know a man who does’

Exhibitors wary of having to source all the separate services needed to set up their stand can either use the “official” suppliers recommended by organisers such as Reed, or they can hire an agent to take care of all their needs. Clip Exhibitions and Display Services claims to look after the whole process for the client.

“From our point of view, avoiding problems starts at the briefing process,” says Clip marketing executive Angelique Martin. “We send sales representatives and exhibition consultants to see the client. They know what questions to ask in order to ensure everything is provided for the exhibitor. We look after the entire process for the client.”

An exhibition stand may involve five or six different contractors and choreographing these is not trivial – you can’t lay the carpet until the stand is built, which in turn can’t take place until the platform is up. Co-ordination is the key.

However tiresome it may be to some, the increasing number of contracts and formal agreements involved in the exhibitions industry is a sign that the sector is becoming increasingly professional. While there are still many potential pitfalls involved in setting up, hosting or exhibiting at a show, at least the copious paper trail is likely to facilitate a speedy apportioning of responsibility – and, hopefully, a satisfactory resolution.

The BBC has appointed a new marketing chief who will be responsible for marketing the organisation and its programming to the regions and eliminating its Southern and London-centric image. Jacky Brandreth, acting head of BBC marketing strategy, is to take on the new role of head of marketing, communications and audiences for nations and regions […]

China has been manufacturing many of the West’s consumer goods for years, but Chinese branding rarely makes it onto the products. Now, all that is set to change. But can indigenous companies break out of the command-economy mindset and face do