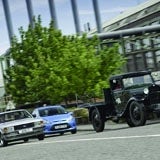 The car marque, which opened its first UK factory in March 1911, is planning a programme of themed marketing events throughout 2011 to highlight its history.

It plans to host historical displays at motoring events throughout the year and a Ford gala event.

Ford will also create branded events at the National Motor Museum at Beaulieu, Hampshire and the Heritage Motor Centre at Gaydon, Warwickshire as well as showcasing classic Ford cars at the Goodwood Revival motor festival in September.

Ford is also launching its new Ford Focus, which it claims will be the centerpiece of its 100-year celebrations.

Ford of Britain chairman, Joe Greenwell, says: ” Ford of Britain is a major pillar of Ford’s global strategy and has been in the fabric of the nation for over a hundred years and no motor company has touched more lives in Britain. We have a proud heritage and a bright future.”