If Ford can help get people talking about mental illness and raise awareness of this often invisible disability, then its latest campaign will have fulfilled its purpose, according to the company’s marketing director Lisa Brankin.

Speaking to Marketing Week, Brankin says “a range of stars had aligned” when the global car manufacturer decided to go ahead and produce the campaign it pitched to Channel 4 as part of the broadcaster’s 2017 £1m Diversity in Advertising Award, despite not winning as it “fit with what Ford was doing as a brand”.

The winner of the annual award receives £1m of free airtime, and despite Channel 4 saying it would match up to £250,000 of airtime for four runners-up, Ford was the only brand to take the broadcaster up on its offer.

The finished product, an ad titled ‘Elephant in the Transit’, shows two men sitting side-by-side in a van when the driver asks his friend if he’s “still on for Friday night?”.

His friend, the passenger, offers a rather muted response which prompts the driver to pull over and ask him what’s wrong.

Nestled between the pair is giant elephant, which symbolises the fact mental illness affects one in four people at some point in their lives yet many are reluctant to speak out about it.

Brankin says despite not winning the award, Ford was always going to go ahead with the campaign as it felt it was an important message and one that aligned with the brand’s wider business objectives.

“We took the idea of being ‘bigger and bolder’ by asking ourselves if we could have a bigger point-of-view on an issue,” she says.

“Mental health is an issue we’ve become more aware of as a company. At the time our HR team had been doing a lot of work around mental health, and we thought, this is something [a mental health campaign] we’ve never done before.”

In collaboration with creative agency GTB, Ford discussed a number of ideas before landing on ‘Elephant in the Transit’ which was then flagged internally with non-marketing teams and the company’s internal diversity group, all of which signed off on it without a problem.

“Everyone felt it was the right thing to do and it aligned with what we were trying to do as a business. Once we came up with that idea we thought it was the perfect way to get our message across,” she says.

We took the idea of being ‘bigger and bolder’ by asking ourselves if we could have a bigger point-of-view on an issue.

“What we didn’t want to do was go into the market and have people say, ‘well why are they doing that?’. We felt this was relevant to our market.”

The decision to use two young men travelling in a transit van stemmed from the fact men in particular struggle to talk about mental health and suicide is the biggest killer of men under the age of 45.

Brankin says the campaign was designed to resonate with the millions of men who travel to and from work everyday, urging them to start a conversation while in the safe space of a private vehicle.

“As a brand, we felt it was an area we could comment on, especially in the commercial vehicles space. While some people who drive transits are women, most are men. This campaign is about young men and mental health. Not because they’re more prone to developing mental health issues but because they often struggle to talk about it,” she says.

Another two in three people are more comfortable talking about issues on the road, in a car or van, according to Ford’s research.

The campaign was made in partnership with ‘Time to Change’ the mental health initiative run by charities Mind and Rethink Mental Illness.

In terms of measuring success, Brankin says the campaign has received a large amount of interaction online and is something the brand will consider building on.

“We haven’t got as far as thinking about making a fresh campaign, but we are definitely thinking about what we do around awareness of mental health this year. A lot of what we’re doing is going to be internally focused. We’ve got a huge network of franchise dealers in the UK and are going to focus on engaging them to raise mental health awareness,” she says.

When asked whether Ford would consider entering Channel 4’s diversity award again Brankin says it would be a case of whether the company felt it had something to contribute or share.

As well as creating this ad to increase awareness of the issue, Ford has also signed the Time to Change employer pledge, which prompts workers to ask their colleagues if they’re okay.

Channel 4 launched its 2018 diversity award at the end of May. This year is it asking brands to help change the portrayal of women in advertising.

Lloyds Bank’s #GetTheInsideOut campaign won the top prize in 2017 after after Volvo pulled out of the competition, claiming it had not approved its creative agency’s entry.

Brands such as ITV, Harry’s and Topman are trying to tackle male mental health and promote more progressive images of masculinity. 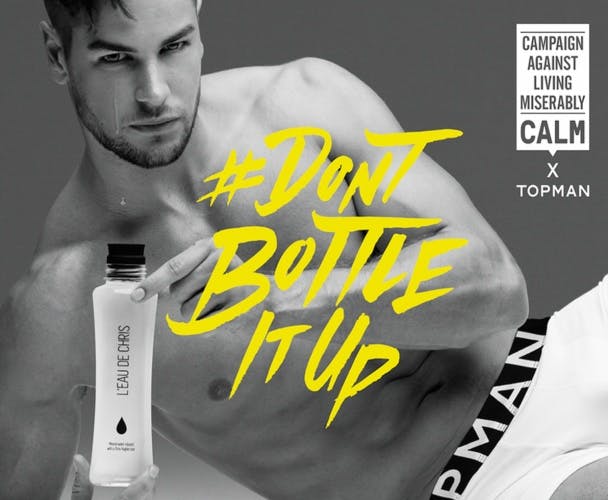 Mental health charity CALM says working with brands has helped it to increase awareness of male suicide in the UK from 19% to 43% over the last two years.

Marketing Week Explores: From toxic masculinity to helping children improve their emotional literacy, we look at how brands are stepping up to tackle mental health.