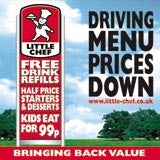 He will be responsible for the restaurant chain’s retail strategy and for the launch of a new “grab and go” coffee bar chain.

Smith, who has already taken over his new role, will work alongside Joanne Blake, the, marketing director for The People’s Restaurant Group, which acquired the motorway cafÃ© chain in October 2005.

At BP, Smith was responsible for the introduction of the Wild Bean CafÃ© concept and he has been bought in to use his experience for the launch of the new Little Chef coffee chain, which is due to launch within weeks.

It is understood he will focus on developing a more contemporary and upmarket image for the Little Chef brand, while building on its well-known family heritage.

The pair, who founded The People’s Restaurant Group, bought all 235 sites, including those located next to Travelodge Hotels.

The high freehold element to the acquisition prompted speculation that they would develop the sites, but the new owners have insisted they want to keep the restaurants.