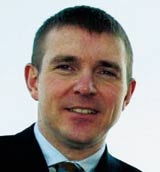 Former Football Association marketing chief Paul Barber is set to join the Ogilvy Group in an undisclosed role within its public relations division. He is poised to sign a contract with WPP Group-owned Ogilvy later this week.

Barber was ousted from the FA at the end of November last year by chief executive Mark Palios, following a restructure of the organisation’s marketing department (MW December 4, 2003).

Barber, with former chief executive Adam Crozier, has been credited with turning the FA into a successful commercial organisation. He was also linked with the chief executive’s job at the FA.

Barber refuses to confirm his move to Ogilvy but adds that an announcement about his new role is imminent. Barber says: “There will be an announcement next week, but I have not yet formally put pen to paper and there are issues to finalise.”

Before working at the FA, Barber was director of communications for the retail arm of Barclays Bank. He has also held marketing positions at Inchcape and Abbey National.

IPC Media’s glossy women’s title Marie Claire is expected to suffer another dip in the six-monthly Audit Bureau of Circulations (ABC) figures due on February 12. Launched in 1988, Marie Claire has been trailing behind the likes of National Magazine Company’s Cosmopolitan and Condé Nast’s Glamour. The January to June 2003 ABC figures showed a […]

Opodo, the online travel service, has appointed MediaCom to handle its £3.5m media planning and buying account permanantly. The agency was handed a project by Opodo in the final quarter of last year.

While a magazine frets about the over-50s’ loss of dexterity, Iain Murray has other evolutionary concerns.