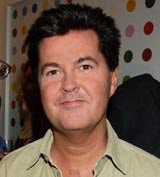 Formula 1 could be “as big as the Olympics” but needs to market itself better to younger consumers, says music impresario Simon Fuller.

In an exclusive interview with Marketing Week, he says that F1 is not being talked about “around the country’s water coolers” in the same way that sports like football are, adding that he wants to find new ways of allowing people to follow the Honda team and its drivers more closely, to tap into the passion of the sport.

Fuller, who earlier this month signed to promote the Honda F1 racing team, says that while F1 “gets a lot right”, there is untapped potential within the sport to engage a younger audience.

He says the ever-increasing number of new media channels offer a range of opportunities to exploit the thrills of F1 racing.

“There are probably enough people actually going to watch F1, but I think there’s scope to bring the dream to more of them,” he adds. “It’s seen as something of a specialist sport, when it could be as big as Wimbledon or the Olympics.”

His comments have been greeted with interest by industry observers, who agree that Fuller could bring a fresh approach.