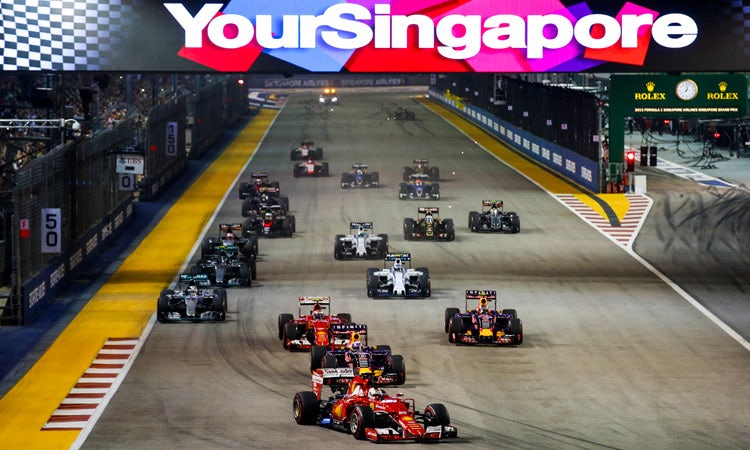 When Liberty Media completed the $8bn deal to acquire Formula One at the start of 2017, one of the first things it did was recruit Murray Barnett as the sport’s first head of global sponsorship and commercial partnerships.

Under the previous ownership, F1 lacked any kind of marketing department and derived most of its revenue from TV rights and race hosting fees, with owner Bernie Ecclestone cutting sponsorship deals personally. This was an outdated model that wasn’t at all joined up with the sport’s teams or drivers,and prevented F1 from ever hitting the commercial heights of other sports like football despite its global appeal.

Each F1 race can have up to 300,000 fans attending, with 80 million people watching live at home. The sport estimates it has 150 million global fans.

Liberty knew that under Ecclestone’s 40-year reign as F1’s commercial supremo, the sport didn’t make the most of its sponsorship opportunities. And Barnett, an experienced marketer poached in March from his role as chief commercial officer at World Rugby, has been tasked with leading the evolution.

When asked by Marketing Week what the biggest changes have been so far, Barnett confidently replies: “As a brand we have become more fan centric and we’re now doing everything through the prism of a fan, or a potential fan.

“Recently there was a young fan seen on TV crying in the stands because his hero Kimi Raikkonen had crashed and been eliminated. We brought him down to hang out with Kimi and go into the pits. This kind of emotive viral marketing activity would never have happened before and it made headlines globally.”

He adds: “I don’t want to talk too much about Ecclestone’s time, but our view now is to try to approach sponsors with a ‘yes, why not?’ attitude as opposed to a ‘no, I don’t understand the question’ kind of attitude. If they want to host a fashion show during a Grand Prix, we’ll make it happen, rather than shut the idea down.

“Nowadays, you have to work a lot harder to prove sponsor value. In the old days, it was just about throwing a few hospitality tickets around or putting some signage on a car. Now brands want authentic integration into the sport and that takes more time and effort to build and deliver.”

For the first time, F1 now has account executives looking after each of its individual sponsors. They also have access to a portal with up-to-date information on F1 fans so they can target the audience more effectively.

Barnett cites Heineken as an example of a sponsor that has benefited from these changes, with the beer brand standing out for its experiential activity including hosting popular pool parties during the Monza Grand Prix.

“The way I look at it is someone should be able to attend a Grand Prix and for nine hours not see one bit of racing and still leave entertained,” adds Murray. “This is what I am telling brands.”

The sport faces a unique challenge in that it has to build the profile of the umbrella brand as well the profile of the 20 tracks used in its races and the 10 teams. However, Barnett says things are becoming far more joined-up: “We see ourselves as one of 31 shareholders in F1. There’s 10 teams, 20 tracks and us over at HQ.

“When we go to see commercial partners, we say to them if we are not right for you centrally, let us give you an intro to the teams or the drivers to build a relationship with them. If one of us grows, the whole sport benefits.”

But who are the fans that sponsors are keen to reach via F1? According to GlobalWebIndex, which analysed the brand engagement levels of 51,280 global F1 fans, the sport can claim to have a cross-generational appeal, with consistently high scores across different age groups.

Of the total F1 audience, 83% shop online each month, with 50% saying they tend to buy with the brands they see advertised during races. F1 fans spend an average of two hours a day on social media, with the study claiming 38% of internet users are F1 fans and one in eight of its millennial fans choosing to watch races online.

But while the opportunities to market to this group are obvious, there are still areas where F1 is lacking. One of the biggest is the sport’s gender divide, with the same study showing men are 50% more likely to watch F1 than women.

This is not helped by the sport’s outdated use of promotional models who act as ‘grid girls’. The practice effectively reduces women to eye candy and is at odds with the progress seen in other sports such as football.

Barnett insists F1 is reviewing the use of grid girls, but he won’t commit to axing them altogether despite mounting pressure to do just that.

“We’re 100% committed to looking into grid girls and making them a more relevant part of the competition rather than just holding a board and standing next to a car,” he says.

“We want to make them fully integrated into the programme and change the perception of what their involvement in the sport is. We haven’t quite cracked what this will look like, but we’ve recognised we need to become more progressive there.”

He cites F1’s Dare to be Different programme, which encourages women to get involved in a career in car engineering as a positive milestone. He says there’s also a fierce debate internally about whether to host a women’s only F1 competition.

He explains: “There is a fierce debate about whether we should have a separate female F1 competition or to keep it fully integrated and let women drivers take part in a mixed gender competition like some have done in the past.

“We have a lot of women in senior management positions at F1, so we’re not as bad as you think, but there’s definitely a lot of room to grow.”

Rebranding and placing faith in eSports

In August, F1 launched its first eSports programme in partnership with developer Codemasters, which creates the official F1 video games. And Barnett has high hopes for this eSports league.

“I’d say, in five or 10 years’ time, the professional gamers will be able to compete against the real-life drivers in real time – one with a controller and one in a car,” he says. “My eldest son is 10-years-old and for all the will in the world he won’t sit for three hours watching a Grand Prix live. However, he loves gaming so eSports means we can connect to this young generation in a more engaging way.”

Barnett is working closely with ad agency Wieden+Kennedy and experiential agency CSM Sport & Entertainment to rebrand F1 ahead of the new season. In November, it unveiled a new logo that it said was inspired by both Coca-Cola and Starbucks’ bids to create signage that stands out more in the digital era. It was a bold move considering the previous brand logo had been the same for 23 years.

This rebranding will be followed by a new graphic package for F1’s television production, a new web platform, a live and a non-live over-the-top TV platform and ‘new social capabilities.’ And one area Barnett says F1’s storytelling will change is in how it treats social purpose and the sport’s impact on the environment.

He explains: “We’re looking at things like carbon off-setting for F1 as an organisation, but it’s also one of the best kept secrets that F1 is actually an incredibly lean engine. We have 50% engine recovery, 1.6 litre hybrid engines, 1,000 break horsepower – people tell me this is astonishing.

“I don’t want to talk negatively about Formula E, but the power of their batteries has to come from somewhere. F1 as a sport can be sustainable and good for the environment so we need to tell that story more often.”

Ultimately, Barnett wants F1 to get to the stage where the logo “triggers an emotion that means different things to different people like Nike’s ‘Just Do It’.”

He concludes: “There’s so many opportunities if you want to sponsor football but if you want to go into motorsport, there’s only one place to be and that’s F1. We want to put the spectacle into spectacular and make this less of a corporate brand that’s more about having fun.

“It is going to take a long time for brands to change their perception of what F1 is [because of the old commercial model] and actually give us consideration, I know that. But we need to have patience and recognise that if we keep offering compelling experiences for brands then others will start to take notice soon rather than later.”