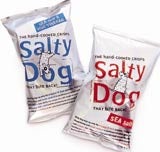 TS Eliot wrote: “Only those who will risk going too far can possibly find out how far one can go.” Design is one area of marketing that offers great scope for creative solutions, yet many marketers are prepared to take a risk only if it’s so carefully calculated that it is actually playing safe. Is this really the best policy, or are the greatest rewards to be gained from the biggest leaps of faith?

Richard Williams, a director of Williams Murray Hamm, the agency that came up with the bold packaging for Hovis, firmly believes that it is virtually impossible to go too far. He says: “You’ll never catch us just adding more steam to the picture of the mug on the soup packet. It amazes me how much moving of the furniture on the Titanic there is. There are precious few radical redesigns.”

Williams says his agency is lucky, in that it has built a reputation for major redesigns, so he is approached by clients who have already rejected the idea of mere tweaking in favour of “doing a Hovis”. But he says there are still many clients that are not brave enough to bite the bullet.

“People seem to think consumers want a picture of some fish fingers and some steam, so they stick with that,” he says. “They think customers go into a zombie-like trance in the supermarket and that they need a big logo and familiar visuals to take them to the right place.

“I absolutely reject the notion of category language. I know Ariel is a detergent. I don’t need the packaging to tell me what category it is in, because it will be sitting with the other detergents in the shop. The whole purpose of branding is differentiation. We want to provoke consumers into a reaction,” adds Williams.

Another agency that has built a reputation for radical thinking is Coley Porter Bell, which last year grabbed headlines with Kotex sanitary towels, by splashing the (formerly taboo) colour red on the packaging, alongside imagery that accentuates the positive, pampering side of being female. The agency has also redesigned Macleans toothpaste, with a modern pack that moves away from the traditional, utilitarian values of dutiful daily maintenance towards a more beautifying, cosmetic feel.

Coley Porter Bell creative director Stephen Bell says that consumer research is an essential guide to the directions in which the design can go. With Kotex, for instance, research was carried out to discover how women felt about periods and sanitary products.

“We spoke to lots of groups of women and discovered that they were sick and tired of dingy, apologetic packs that had no sense of ‘women’ on them,” explains Bell. “So we decided to move from the functional to the personal and emphasise the positive side of being female.”

Jeremy Haines, creative director of design company Haines McGregor, is another advocate of consumer research, provided it is conducted wisely. “Good research helps you to understand underlying consumer demands and motivations,” he says. “And the final product must be accurate in reflecting those.”

Haines McGregor recently created the brand identity for Chiltern Snacks’ Salty Dog crisps, an upmarket brand that competes with Kettle Chips and Walkers Sensations. The agency came up with a cheeky dog character and distinctive silver packaging, and initial sales of the brand have been encouraging.

Stuart Mackay, partner at independent brand consultancy Ergo, which has worked on brands including Planters peanuts, agrees that consumer research and thorough planning have their place in the design process. He adds that research can also be used to persuade brand owners to go that bit further.

“Before worrying about how far to move forward, it is imperative to know which direction to go in,” he says. “Good consumer research, using creativity and strategy hand in hand, can reveal both the brand’s potential and the optimum direction to take it in. This is where the old tug-of-war between the ‘creative’ designer and the ‘conservative’ client always fell down – and why brand planning was born. By taking the research approach, we often find that brand potential is far greater than the brand owner imagined.”

Don’t be told what to do

But Mackay cautions that it is vital to avoid the temptation to let consumer research make the decision, rather than merely inform it. “Avoid the famous analogy: using research like a drunk uses a lamp-post – for support, rather than illumination,” he warns.

“By all means, check strategy and brand values with consumers, but don’t check the visuals because that will keep you on the conservative straight and narrow,” advises Nick Webb, marketing director of branding consultancy Brandhouse WTS, which came up with the black can for Tango. More recently, Brandhouse WTS has created the new identity for Galaxy chocolate.

Webb holds that research has become too dominant in recent years and that many clients hide behind it. If Apple and Sony had listened to consumer research, he says, we would never have seen the iMac or the Walkman.

Pierre Vermier, creative director at corporate identity agency HGVFelton, also warns of the dangers of allowing research too great a role in the creative process: “If the design ideas that show real flair are rationalised away in the development and strategy process, what reaches the consumer is a ‘design by committee’ compromise. Creative flair must be actively sought by clients and not compromised by a focus group mindset.”

HGVFelton often invites advertising creatives to join a pitch team, to get a different perspective on the branding challenge.

“Research can be hugely valuable,” says Vermier, “but we must encourage clients to be its master rather than its slave – helping them to use it to inform and guide the creative process, not to make the decisions. Great designers come up with ideas intuitively. Clients won’t always understand that, and they might be quite frightened by it. It is our responsibility to give them the courage to act on our recommendations.”

Design Bridge executive chairman branding and packaging Jill Marshall also sees a major part of the design agency’s job as reassuring the client that it will be safe to do more than simply tweak a product. When Design Bridge takes on a new client, it holds what it calls “direction days” to check that everyone is working towards the same goals.

Consumers, too, need reassurance, adds Marshall: “Consumers sometimes think changed design must mean a changed product. We have to communicate that the product hasn’t changed. You can be different so long as you stay relevant.”

This thinking was behind Design Bridge’s bottle for Warre’s Otima port, which broke the rules of port packaging by using clear glass, but has sold well.

On the other hand, Marshall believes that the much-criticised rebranding of Babycham in the early Nineties failed because it went too far and left nothing for consumers to recognise.

Marshall also cautions that what consumers say in research groups may be completely different from how they will behave in store: Design Bridge recently redesigned Adnams beer identity and packaging and though the visual branding didn’t research well, the client believed in the idea and went ahead anyway.

Maintaining the trust of the client is vital, says David Rainbird, director of design company Fibre, which has worked alongside creative agency The Fish Can Sing on a number of projects, including a digital aquarium set up outside the Design Museum, party invitations, books and posters, for Motorola.

“Once there is trust between client and supplier, the client will be more likely to go with your ideas,” says Rainbird. “Motorola is prepared to take risks, so we can too.”

In one project, Fibre devised a poster of the transcript of the Apollo 11 moon landings. It had thousands of words of copy but no big headline or logo. The line about “one small step…” was picked out in red.

“The ad was about owning that history,” explains Rainbird. “Without Motorola technology, no one would have heard those words.”

But to carry out a project of this sort, the agency has to persuade the client that the slow burn works, says Rainbird, and that an idea can stand out without a huge logo. It is conceptually, if not physically, bold.

Rainbird admits wondering if some of his executions are too understated and whether some design work is created too much for the eyes of the design community and not enough for consumers.

It is vital to keep the consumer in mind when taking a brand in a radical direction. The Motorola logo on the Apollo 11 poster may, in the end, have been too small. And Channel 4’s shift to using four circles for its identity may have been too subtle, prompting the channel to revert to a focus on the figure 4. In another sphere, British Airways failed to consider its loyal home market when it introduced its internationally inspired tailfins. It was almost universally panned for its efforts.

But these should not be reasons for merely sticking with the old and adding “a bit more steam”. For every Babycham, there is a triumphant Tango, and for every BAs, there is a hugely successful, bean-smothered Hovis wrapper. A well-researched strategy and identity that challenge and delight consumers without alienating or confusing them will make an impact on the public and on sales.

Hasbro is to launch Action Force, a team of allies for its Action Man toy.