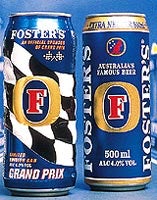 British Grand Prix title sponsor Foster’s lager has joined calls for the race to be moved back to its traditional summer date after rain wrecked the event for thousands of spectators.

This year’s Grand Prix was the first test of a ten-year sponsorship deal, thought to be worth more than &£10m a year, which gives Foster’s naming rights for the Belgian Grand Prix.

Thousands of fans were unable to gain access to spectator areas at Silverstone when rain turned car parks into a quagmire, leaving organisers with a &£3m reimbursement bill.

Formula One chief Bernie Ecclestone has told organisers he will press for a return to the Grand Prix’s traditional July date – a move welcomed by Scottish Courage, which markets Foster’s in the UK.

A Scottish Courage spokesman says: “The effort made by thousands of people to get to the race, despite the conditions, is testimony to the popularity of the Foster’s British Grand Prix.

“Quite clearly, those who attended were able to sample plenty of the amber nectar on site, and everybody seemed to have a great time.

“Nevertheless, as title sponsors for the next ten years, we would be delighted to see the event return to its normal date in July as a highlight in the British summer sporting calendar.”

Despite criticism of the organisers, Ecclestone has indicated that the British Grand Prix is likely to stay at Silverstone, rather than move to rival circuit Brands Hatch when its new owner Octagon takes over the running of the event in 2002.

Some focus groups have been criticised for failing to offer sufficient analysis or interpretation. They would be more productive if clients didn’t distract them with secondary lines of enquiry.

The major pub chains are confident that they have the brands and physical clout to cater for impending 24-hour licensing. But can they make the new breed of ‘open all hours’ venues pay their way?

Energy drink Enorm is being rolled out in the UK this week as a rival to clubbers’ favourite soft drink, Red Bull. Enorm is brewed in the Netherlands by Ulvenhoutsaan12, which has licensed Watford-based Sapna Impex to handle the UK roll-out. The drink is aimed at adults and is being launched with the slogan “Life […]