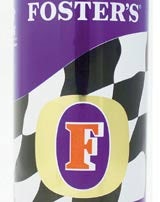 This week, Scottish Courage launches the smallest lager bottle in the UK market.

The 200ml Foster’s Shortie bottles, to be rolled out later this week, are expected to retail at between £8.99 and £9.99 for a pack of 20 and are aimed at female consumers in an attempt to build lager sales.

Industry insiders say that the launch will be supported by a “major” advertising blitz. Details are not available.

One insider says: “The Foster’s Shorties will also target occasion drinkers and a marketing programme around the launch is being planned for summer, just in time for the barbecue season.”

Foster’s current campaign, which features a Japanese man and his house-cleaning robot, is aimed at its core market of men aged under 45.

The first TV campaign for Beck’s is due to be launched this summer.