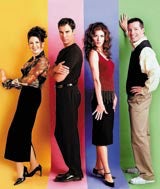 The much anticipated news that Kevin Lygo, the man credited with giving the green light to So Graham Norton and Da Ali G Show, is quitting Five to return to Channel 4 as director of television, has thrown up split reactions from television buyers.

Lygo, Five director of programmes and former Channel 4 head of entertainment and music and launch controller of E4, replaces Tim Gardam, who leaves at the end of the year.

Having worked his magic turning Five – with its limited £157m programme budget – from a channel known for its infamous three F’s of “football, films and fucking” to one with a more mature schedule that includes arts programmes at peak time and a heavy dose of US cop shows, Lygo’s departure is seen as a major loss.

But for Channel 4 Lygo’s appointment is a welcome boost. His arrival coincides with the announcement of BARB figures which show that the channel’s audience share for the first six months of 2003 has fallen to 9.5 per cent from 10.07 per cent. However a Channel 4 spokesman makes the point: “At peak our share of 16to 34-year-olds is level and ABC1s is virtually level for the year so far.”

Nevertheless, Channel 4 has been forced to axe Chris Evans’ Boys and Girls after one series due to poor viewing figures. It is expected to make the same decision with struggling breakfast show RI:SE. Its ratings success Big Brother also appears to have gone off the boil, having attracted an average audience of 4.5 million for the series so far this year, compared with an average of 5.3 million for last year’s series. However, this is still significantly more than the average 2 million audience that the slot has achieved for the year to date.

MindShare investment director Nick Theakstone says: “I think Lygo is a fantastic appointment for Channel 4 and his departure is a disaster for Five.”

He adds: “Channel 4 was the home of good ideas, it was always delivering something new and critically acclaimed and that has been missing for the past year or so.”

Five, however, is the only terrestrial channel to experience an increase in its share of viewing for the first six months of the year from 6.38 per cent to 6.45 per cent compared with the same period last year.

Yet it is still a long way from hitting its target of a ten per cent share and faces having its commissioning team broken up by Lygo, who poached three of his former colleagues from Channel 4 when he joined Five.

Carat broadcast planning director David Peters says: “Lygo’s departure is a disappointment for Five. He made an impact in improving audience [share] and also in the perceived quality of the channel with audience and advertisers. Five needs to get someone who is going to continue that strategy.”

But it has not all been good news for Lygo. The “Live with…” format, which was initially presented by Radio 1’s Chris Moyles, and then XFM’s Christian O’Connell, has been axed.

When Lygo starts at Channel 4 he will find that some of the hard work has already been done by Mark Thompson, who joined last year as chief executive.

Media Planning Group head of broadcast Andrew Canter says: “Thompson has a clear vision for the channel, but he has had to sort out a lot of issues, including the business side. He has now got to the stage when he is able to begin his role deciding what goes where.”

On his arrival in 2002, Thompson was faced with a £28.1m loss incurred for 2001 at Channel 4 – its first for ten years. After restructuring the company and axing more than 200 jobs, he took Channel 4 back into the black, repo

rting a £16.5m pre-tax profit for 2002 with revenues of £763m. He also announced an increase in the programme budget for 2003 to £439m, as well as cutting a lot of dead wood in the schedule, including Brookside and Eurotrash.

Despite the continuation of old stalwarts such as Friends and Hollyoaks, the past year or so has also brought successes such as Faking It, Wife Swap, Six Feet Under, How Clean is Your House? and Will &amp; Grace.

Now TV buyers would like to see Lygo make the channel less reliant on Big Brother and So Graham Norton, creating more consistency across the programming schedule with regard to delivering key demographics and audience share. They also want regular start times for shows such as The Sopranos and West Wing, and new drama and entertainment programmes that will continue to appeal to the ABC1s and 16to 34-year-olds who have historically made the channel so appealing to advertisers.

But with the growth of multi-channel, Carat’s Peters believes that “a realistic target” for Channel 4 will be to hold audience share, which it has not been able to do so far. That task may become even harder for Lygo, as his former chief executive at Five, Dawn Airey, sets to work on programming output at BSkyB’s channels such as Sky One.