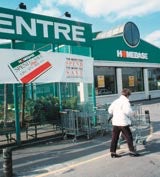 Argos Retail Group is reviewing its media buying and planning accounts for its Argos and Homebase brands with a view to consolidating the business into one agency. Together the accounts are worth &£42.4m

Marketing Week was the first to report that Argos Retail Group was considering consolidating the two accounts after its parent company GUS bought the Homebase DIY chain in a &£900m deal in November last year (MW March 27). At the time of the acquisition, a Homebase spokesman said that the deal would result in combined annual savings of &£20m over three years. A combined media buying and planning operation could contribute to this saving.

The review will be overseen by Paul Geddes, marketing director for Argos, and Andrea Preducov, head of brand marketing for Homebase. It will be one of Preducov’s last tasks before leaving the company later this year (MW May 1).

It is thought that ARG Equation, the catalogue business that includes Kays and Abound, will not be included in the review. Universal McCann Manchester handles its &£10m media account.

Homebase reviewed its advertising account last year just before it was bought, adding Lowe to the roster alongside incumbent Abbott Mead Vickers.BBDO.

The Greater London Authority is offering sponsorship packages worth 200,000 for this year’s anti-racist Respect festival. The event will be held in and around the Millennium Dome on July 19.

Cosmopolitan has teamed up with the Metropolitan Police rape squad’s initiative Project Sapphire. It will help to set up a 24-hour telephone hotline to support rape victims.

BSkyB has reported a rise of 96 per cent in pre-tax profits to 254m and a 15 per cent increase in ad revenue to 204m for the nine months ending March 31.