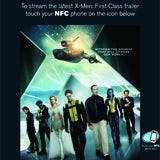 Owners of NFC handsets will be able to tap their phones on X-Men First Class outdoor posters to access the movie trailer and its Facebook page.

The rear of each poster will have a pre-programmed NFC chip affixed.

Last week Orange became the first network operator to launch mobile contactless payment, trumping O2 which is set to launch its own NFC payments service in the second half of this year.