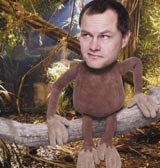 The BBC is to use a puppet monkey in an advertising campaign telling viewers how they can get digital TV in a move that mirrors the now defunct ITV Digital’s advertising, which starred Monkey and Johnny Vegas.

Digital terrestrial platform ITV Digital was eventually replaced by the BBC-backed Freeview, one of three platforms that the BBC is promoting with its campaign created by DFGW. One of the executions shows a monkey talking to a friend about how to get digital TV either by signing up to digital satellite or cable, or by buying a Freeview box for as little as &£80.

The campaign continues the “face-off” device which was used in a previous campaign, where the main characters peel away their faces to reveal those of celebrities.

Andrew Medd, a partner at Mother, the advertising agency responsible for creating the ITV Digital Monkey, says: “We are flattered. I think it is ironic that digital TV and monkeys have got a history.”

BBC head of digital marketing and communications Ilse Howling does not think that people will draw a parallel between the BBC and ITV Digital campaigns: “I don’t think people will make the connection. They are like chalk and cheese.”