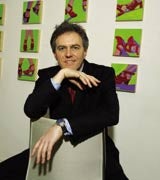 The teething years have come and gone for the ten-year-old online advertising industry, which is now worth more than &£500m and no longer has to scream to be heard as it is on the verge of overtaking radio as an ad medium. With the industry approaching a new level of maturity it has turned to a marketing heavyweight for its public face – Guy Phillipson, former head of advertising for Vodafone UK (MW last week).

Not only that. In keeping with its relative youth, the Interactive Advertising Bureau (IAB) UK has chosen a chief executive who is known for his charisma.

Described by many as a “consummate performer” Phillipson, deploys a range of skills – and not only in the marketing arena. A classically trained musician who studied piano and composition at London’s Trinity College of Music, the 45-year-old has in the past regularly taken to the stage to perform a stand-up routine dressed as a fictitious female Tory Party supporter called Gooseberry Tart, and narrowly missed winning the Radio Advertising Bureau (RAB)’s competition for best DJ from the media industry in 2002.

Although often to be found sporting matching tie, socks and watch, there is much more than sartorial elegance to Phillipson, who relaxes by playing jazz guitar and the piano, than his appearance and presentation skills, according to former work colleagues.

His marketing years spent at Granada Group’s retail operations; at Barclays Bank; at sales promotion agency The Marketing Store; and Vodafone, where he took voluntary redundancy at the end of last year, have helped him develop a strong sense of return on marketing investment. This will stand him in good stead when trying to convince hardened marketers of the benefits of online, some of whom he says are still wary of committing significant sums to it. Phillipson admits that although he may not know all the online “jargon”, he is “pretty au fait with using the internet as a marketing tool”. Just as well, perhaps.

While at Vodafone, Phillipson dealt with Alison Reay, the sales director of Yahoo! UK, who as an IAB leadership council member was also involved in his recruitment. She says: “He makes things very clear, and can explain in plain English how the internet works as a marketing medium.”

That ability to speak the advertisers’ language is vital, she believes, because the IAB needs to “close the gap between the time spent online and the amount spent on advertising online” and to encourage more packaged goods advertisers to use the medium.

Phillipson is keen to promote online advertising not just as a tool to generate sales, but also to build brands. He’s no stranger to having to get to grips with new technology and marketing it to end-users. At his previous employer he worked on the launch of Vodafone Live! – and the infamous &£5m “text flirting” campaign that sparked a number of public complaints and regulatory intervention.

Phillipson says: “I’ve always been interested in markets that are evolving rapidly.” The internet is certainly doing that. According to figures from the IAB and PricewaterhouseCoopers, UK marketers spent over &£500m on advertising online during 2004, with the rate of growth in the second half of the year standing at 76 per cent on the same period for 2003. The industry has come a long way since 1998, when the IAB and PwC records began. Total online ad spend in the first quarter was then just &£3.4m

Much of this growth can be attributed to the efforts of the IAB and of Danny Meadows-Klue, one of the trade body’s founders and, since 2000, its chief executive. Meadows-Klue is an internet industry veteran and a former publisher of The Daily Telegraph’s award-winning internet service, The Electronic Telegraph.

But last November, Meadows-Klue announced he would be stepping down, and the IAB made it clear that it was looking for someone with a background in more traditional media to replace him. Industry sources suggest that some members of the IAB’s ruling council – made up of representatives of the major online media owners and service providers – believed the body lacked focus and needed to concentrate on identifying the issues that concerned the major spenders on more traditional advertising media, and on how best the online industry could sell itself.

Having been responsible for an ad and sponsorship budget of &£60m a year at Vodafone, Phillipson will be aware of such issues.

IAB non-executive chairman Richard Eyre says: “This is still a relatively new industry, although it has grown rapidly compared with other media. There is a job to do with the more traditional advertising thinkers, who are still reluctant to spend online. But new media is now neither new nor quirky, and it should have equal claims on advertisers’ marketing budgets.”

But RAB chief executive and founder Douglas McArthur has some words of warning for Phillipson when it comes to working for a trade body: “In 12 years, I’ve learned that trade marketing bodies work best if they respond to customer needs rather than to the demands of media owners. Guy is very well qualified to handle the advertising client-facing work, and should prove very successful – so long as he doesn’t get sucked into media politics.”

But Phillipson will not be alone in trying to manage these various interests. Eyre himself comes from a traditional media background: he has been chief executive at both ITV Network Centre and Capital Radio. He adds: “Over the past couple of years, there has been a steady migration of people from traditional media to online.”

This is a point that is backed by Andy Jonesco, now vice-president of interactive marketing at AOL UK and an IAB council member. He is also a former managing director of Express Newspapers.

This is not the first time that marketers from traditional industries have moved into the online sector: at the end of the Nineties there was something of a stampede. The difference then was that those who moved over seemed, on the whole, to be younger and more familiar with hi-tech gadgetry than with running companies. Many of the businesses established at this time went spectacularly bust, and it has been estimated that in the US, 5,000 internet start-ups folded between 2000 and 2003 (MW April 24, 2003).

Jonesco says: “The internet is the Elysian fields of media – it’s where everyone should be. It is the most significant medium to have come along in my lifetime, and it’s here to stay. It’s natural that people with ‘traditional’ media experience should move over. It offers exactly what marketers have been looking for for years: reach, level of detail, targeting, the ability to measure response.”

All that remains for Phillipson to do is to convince marketers that this is the case.