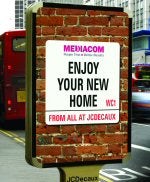 The Diary always thought that rival media agencies got on about as well as Shilpa, Danielle and Jade in the Big Brother house – but it seems that unlike those bitchy “celebs”, media types do actually harbour genuine concerns for each other.

Take the example of heavyweights MediaCom and JC Decaux.

Media company MediaCom recently moved into swanky new offices in London’s trendy Holborn, and JC Decaux – which runs the network of London bus shelters – decided to commemorate the event by posting messages at nearby bus stops, wishing MediaCom well in its new home.

The Diary is delighted to see such humanitarian concern for a rival, and it makes a change from the old tactic of trying to poach staff by advertising outside competitors’ offices. Maybe, 40 years after the original, 2007 will provide us with another summer of love.

Michelin Tyres has handed an advertising project to start-up agency TBL, which opened its doors this month. It is not clear how much the account is worth or which part of the business the agency will be working on. The deal does not affect the company’s existing agency, TBWA/London. TBL was founded by Rob Muir […]