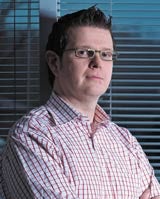 The man who helped redefine the car ad and led Honda to three successive BTA awards has left the firm to take up a new challenge with Motorola. Can he continue the magic? By Robert Lester

Superlatives are bandied about too easily these days, but it would be difficult to find more than a handful of people in the marketing industry who think that Honda’s advertising over the past three years has been anything less than exceptional. Inevitably, the man behind the multi-award-winning ads, Simon Thompson, began to attract admiring glances from blue-chip companies, and at the beginning of this year telecoms giant Motorola managed to tempt him away from Honda after 15 years’ service.

Thompson only started as director of marketing for Europe with Motorola’s handset division on March 1, but visits to the US and Russia are proof that he is now on the international stage. It means he will see less of his young family while he acquaints himself with Motorola’s global businesses, but this is a role he is clearly relishing.

Born into a family of entre”preneurs, the 39-year-old joined the Japanese company in 1990 and spent time in almost every department, before being asked to write a strategy for Honda Europe to breathe new life into the brand.

He came up with a concept based around “what we are and not what we make”, and after the strategy was introduced in the UK he was handed the role of head of marketing in 2002. Although he did not appoint Wieden &amp; Kennedy – the agency was hired by his predecessor Stephen Hollings in 2001 – he immediately set about trying to change the company’s image, which he says was “dead from the neck down”, through advertising.

“We realised there was no differentiation,” says Thompson. “In carland, the guy either got the girl or the job, or drove round the bend quickly with his tyres squealing. The ads were all black, white and silver, and if you took the company badge out there was no difference between them.”

The result was “Cog”, which broke in 2003. The ad, which shows a chain reaction involving 85 car parts and took 606 takes to make, won Best TV Commercial of the Year at the British Television Advertising (BTA) Awards and first prize at the US Clio Awards. Follow-up “Grrr”, the animated commercial for diesel cars, won the same BTA award the following year, as well as the Grand Prix at Cannes. “Impossible Dream”, the brand ad featuring past and present Honda products, won the company a third consecutive BTA gong in March this year.

Thompson explains: “The idea behind Cog was quite simple. Honda is an engineering business but does it with passion. Cog was just about the passion behind the engineering.” Cog was only the fourth most successful ad in terms of commercial gain during Thompson’s time as marketing director. His personal favourite was “Impossible Dream”, because it told the Honda story, which Thompson says was his dream. He adds that he was happy to leave after that because “we had got to the point I always wanted to reach”.

Some have questioned the effectiveness of the ads, with Toyota GB commercial director Paul Philpott saying recently that Honda’s sales increase – up from 77,000 in 2002 to more than 98,000 last year – was down to the company’s entry into the small and diesel car markets.

Thompson hits back, saying he increased Honda’s awareness from 12% to 28%, and its consideration from 12% to 33%, without increasing marketing spend. “I don’t care what people think,” he adds. “It’s not a popularity contest. I can understand why our competitors didn’t like it. They were painting the walls magnolia and wondering why it wasn’t working.”

Thompson describes himself as a “change agent” and says that he realised he needed to gain experience in other sectors to become a more complete marketer. “I carry my mobile phone next to my heart every day,” says Thompson. “If I leave it at home I’ll go back for it but I think I have more emotional attachment to my car. That’s been puzzling me.

“There is certainly more potential in Motorola as a business and I believe marketing can play a role in extracting that potential. The Motorola train is doing very well. My role is to accelerate it, it doesn’t need to go onto a different track.”

Moran, who left the car sector in 2003 to join Thames Water as worldwide director of marketing and strategy, says the automotive industry is a good training ground for other sectors. He left Thames Water after less than two years when his role was axed but says that he does not regret making the move. However, he adds: “One of the challenges Simon will have is to persuade people he can make a big contribution from the start. Sometimes, if people don’t have sector experience, others can be quite negative.”

Wieden &amp; Kennedy managing director Neil Christie says Thompson is someone who “likes to shake things up and has a passion for making a difference”. Christie thinks the move from cars to mobile phones is logical because there are similarities between the sectors. “Handset manufacturers are engineering companies that are very focused on product launches,” he says. “They have neglected building their brands because they have been focused on technological advances. They’re manufacturer, not customer, driven so there’s an opportunity to build a relationship.”

Motorola currently works with Abbott Mead Vickers.BBDO in Europe. Thompson says he is not “hell-bent” on appointing Wieden &amp; Kennedy, and adds that he is concentrating on learning the basics before looking at the operational side of the business. The once dominant Motorola is currently the second-biggest manufacturer in the world behind Nokia but Thompson says he will be “thoroughly pissed off” if the company is not the market leader again within two years.

This ambitious streak has led many to identify Thompson as a future chief executive. However, one industry source believes Thompson “probably lacks the diplomatic touch required” to do the top job. Thompson says he would “never say never”, but adds: “To be truly satisfied, I need to have the freedom to move businesses on. My definition of a chief executive might be different to the world’s, and if that’s the case it might be that the two never meet.”

Thompson has given himself “two years off” from owning a Honda, but he is still proud of the company and says he would be “gutted” if the current success did not continue. For now, he is turning his attention to Motorola and, if his achievements at Honda are anything to go by, Nokia and the rest had better be on their toes.