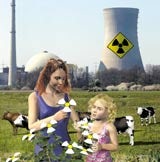 You can’t see it, but you know it is a killer. From Hiroshima to Chernobyl, it has reduced humans to dust and produced genetic mutations through generations, though it has no colour, no smell and no sound. Perhaps it is the invisibility of nuclear radiation that strikes fear into even the most apathetic members of the public.

So the ad agencies lining up to fight for the British Nuclear Fuels (BNFL) account, put out to tender last week (MW last week), may wonder what they are letting themselves in for. Images of two-headed fish used in a Guinness ad and the portrayal of the nuclear industry in The Simpsons all add to the fear surrounding nuclear power. The winning agency will be pitched into the middle of a battle for public opinion, with the well-resourced nuclear lobby on one side and the “green” anti-nuclear lobby on the other.

BNFL, the Government-owned nuclear generator and reprocessor of radioactive waste, was a darling of the television advertising world through the Nineties, burning up to &£6m of State finance each year on lavish ad campaigns created by CDP that appeared not just to promote the company, or even simply n

Last week, BNFL’s procurement department issued a brief that held out the tantalising prospect for ad agencies of a return to such advertising. The work produced would certainly make a welcome addition to any show reel – an unusual example of selling the unsaleable.

Unfortunately for the agencies, BNFL’s marketing boss, director of corporate affairs Philip Dewhurst, a former head of public relations company WeberShandwick, says the days of snazzy ad campaigns are over.

“We don’t plan to do any significant advertising,” he says, “but we need an agency. With the changes at CDP (it collapsed and merged with Travis Sully) we thought we’d better test the market. We’ve gone out for a credentials’ discussion. We might hire someone, but on a retainer basis.”

The history of BNFL and its advertising is an indicator of how governments have approached the nuclear question over the past 20 years. With plans afoot to sell off part of BNFL through a private-public partnership, Dewhurst admits that a return to advertising could be on the agenda, albeit a couple of years down the line.

But there is some confusion about the Government’s approach to nuclear energy, which at present accounts for almost 25 per cent of electricity generation in the UK. In the next six weeks its Energy White Paper will be published, though this is not expected to offer a definitive view of the future of nuclear power in the UK.

Britain’s nuclear power stations are nearing the end of their life cycle, and by 2020 Sizewell B on the Suffolk coast will be the only reactor still working, unless the Government gives nuclear power a new lease of life. Last week, the Government agreed to hand over &£650m to bail out the UK’s largest energy provider British Energy and take part-ownership of the nuclear-plant operator.

The jury is still out

Following the move, energy minister Brian Wilson refused to spell out clearly whether the nuclear industry was going to be phased out or given the go-ahead for a new round of reactor construction. He backed nuclear energy as a way of reducing carbon emissions, but refused to make a clear commitment to building more nuclear power stations.

“I think the jury’s still out on that and will stay there for a while… the imperative is so much stronger to reduce carbon emissions in our energy mix than to actually dismantle the one significant source of energy generation that we have which does not produce carbon. The White Paper formulation will be about keeping the option open,” he told BBC’s Newsnight.

The uncertainty of the nuclear future may go some way to explaining the reticence of BNFL to make a firm commitment to running any large-scale ad campaigns. But it is also an indication of how public opinion is becoming a key influence on energy policy.

Whatever decision the Government makes about reactivating the nuclear industry, BNFL will thrive for many years to come through its business in reprocessing nuclear waste and its expertise in decommissioning old nuclear power plants. The company points out that its marketing has moved towards client relations rather than promoting nuclear power to the public – it concentrates more on targeting governments than opinion formers.

But all this could change if the Government decides that the only way to hit targets for reducing carbon is through nuclear power, rather than sustainable forms of energy such as wind power favoured by green lobbyists.

One observer says the CDP campaigns were based on an intricate set of needs: BNFL had to make the case for nuclear power, and needed to convince politicians that it was gaining the public’s support. So the populist ad campaigns were a complex bluff – as one insider says: “It is not what people think that is so important, but what opinion formers think they think.”

The campaigns were really aimed at opinion formers, though they claimed to target the general public. The ads attempted to neutralise the negative images formed of people working in the nuclear industry. “The concern was that they were a bunch of people out of James Bond films doing nasty things with nuclear power when in fact they were engineers,” says the insider.

By promoting the name of BNFL, nuclear power would appear less frightening as it would let people see that there is real company with real people behind it. Critics said the ads were overtly political and should have been banned, but they were allowed through by the Broadcast Advertising Clearance Centre and the Independent Television Commission.

According to research by MORI, tracking BNFL’s favourability ratings, the campaigns were reasonably successful. In 1994, at the beginning of the big-spend campaigns, just nine per cent of respondents were favourable to BNFL, whereas by October 1999, this had risen to 25 per cent. However, the proportion of those who were neither favourable nor unfavourable to the company rose as well, from 25 per cent to 49 per cent. And unfavourability also rose – from 13 per cent in 1994 to 18 per cent in 1999. So by raising its head above the parapet, BNFL paradoxically made itself both more popular and more unpopular.

Then disaster struck. In 1999, it emerged that BNFL workers at the Sellafield plant had falsified quality-control data on exported Mox fuel – mixed-oxide fuel, the product of the reprocessing of spent nuclear fuel rods. A shipment of the fuel had been refused by a Japanese nuclear plant, and the ship carrying it was forced to return to Sellafield in a three-year, 36,000-mile round trip believed to have cost &£100m. The crisis led to a clean out of BNFL’s top staff and new senior management were put in place.

While some believe these events all but wiped out any good feeling created by the campaigns, one observer believes that having done the advertising, BNFL built some “positive credits” with the public, so negative reaction was not as strong as it could have been.

BNFL’s Dewhurst says the ad campaigns “just came to the end of their life”, but he admits that it was impossible to show the television ads while the bad publicity was swirling around the company’s head. “When you are in a defensive position, you can’t advertise your way out of it, and that made us look at customer relations,” he says. The campaigns were suspended, and nothing has been seen of corporate BNFL on TV screens since.

The main thrust of BNFL’s propaganda drive of the past few years has been through its revamped Sellafield Visitor Centre, which has been designed by the Science Museum and attracts some 150,000 visitors each year. It has exhibits and points of view from Greenpeace and Friends of the Earth, and attempts to offer an intelligent discussion about the pros and cons of nuclear energy. The visitor centre has been advertised by Cheetham Bell/JWT of Manchester and it aims to explain the issues to the public. Tours of the Sellafield plant are meant to show just how safe generating nuclear power is.

However, these tours have been suspended since September 11, which in the great PR battle over safety seems to indicate that Sellafield may be vulnerable to terrorist attack – a concern not without foundation following protesters’ success at gaining unauthorised access to Sizewell B this week.

Where does the wind blow?

While green campaigners argue that most of our energy needs can be met by sustainable methods such as wind farms, BNFL says there will never be sufficient windmills to power the whole country. Greenpeace nuclear campaigner Peter Roche envisages a future powered by electricity-producing wind farms located in the sea and believes BNFL will be stripped of its reprocessing capabilities. “Reprocessing will have to go,” he says. “It is pointless and causes huge pollution in the Irish Sea. It produces plutonium that could be stolen by terrorists, and it is expensive to process.” He sees BNFL’s future lying in decommissioning old nuclear plants and taking care of nuclear waste – a task that will last for centuries.

The Government appears to have left open a possibility that the nuclear industry could be rescued from oblivion in the future, though this will depend on how it perceives public opinion to be moving. BNFL will need to be ready to promote the case for nuclear energy once more. The PR crisis over falsified quality-control data will no doubt fade quickly from the public’s mind and so should not cause too much long-term damage. But the anti-nuclear lobby will also be campaigning for sustainable energy, and BNFL will need to attack their arguments head on. The future of the nuclear industry depends on the battle for public opinion. But it is one the green lobbyists seem likely to win.

Northern Rock is close to signing a multi-million pound two-year deal to become the next shirt sponsor of Newcastle United Football Club. The Premiership club has been searching for a new sponsor since the beginning of this season, when troubled NTL pulled out of its deal early (MW September 26, 2002). Northern Rock advertising director […]

The Department of Health (DoH) has condemned a national marketing campaign promoting Unilever Bestfoods’ Knorr Vie soup range as a healthy eating product. Last week the Government unveiled its criteria for the use of its “Five A Day” logo. The logo, which represents the five daily portions of fruit and vegetables people should be eating, […]