Coca-Cola’s sugar-free reaction to obesity fears among young men, Coke Zero, has attracted more of the target consumers to the cola market. Camille Alarcon reports in its success so far

It has been just over two years since Coca-Cola Company launched its “bloke coke” into the UK market, and even its rivals seem to agree that Coca-Cola Zero has helped to bolster growth in the cola sector, which has been hit by fears around growing obesity levels.

As with the company itself, it is never far away from the headlines, most recently attracting the ire of Chicago businessman, Mirza Baig, who last week began legal action against the company for using the “Zero” trademark, claiming Coke had stolen the name.

Just how successful his case will be is yet to be determined. The drinks company claims it is too busy managing Coke Zero’s growth to care. According to AC Nielsen data, in its second year in the UK market it has sold almost 59 million litres and is worth over £57m. In the on-trade channel it reported a growth in volume of 14% in March this year. Since it has entered the UK, it has been launched in over 70 countries.

When it launched in June 2006, it enlisted Girls Aloud singer Cheryl Cole as part of its campaign to attract young male consumers who enjoyed the taste of regular Coke, but were becoming increasingly concerned about the need to reduce their sugar intake.

Less than a year later PepsiCo’s sugar-free cola drinks began to feel the pinch in the take-home market, with Pepsi Max and Diet Pepsi volume sales dropping to 129 million litres in the seven months since June 2006, according to AC Nielsen – a fall from the 138 litres it produced in the same period the previous year. In contrast, sales for Coke’s portfolio of sugar-free drinks jumped from 279 million to 300 million litres, with Coke Zero selling 40 million litres.

One industry insider believes Pepsi Max sales are now steady and the en-trance of Coke Zero has “attracted new shoppers and grown the [cola] market.

Coke has been investing much in Coke Zero’s marketing, this year launching the “Life as it should be” campaign. Created by Grey Copenhagen and adapted for the UK market by Vallance Carruthers Coleman Priest, it included TV, outdoor and below-the-line activity. It also launched a football promotion and last month it commenced its Street Striker competition involving Wayne Rooney to find the nation’s best street footballers, featuring on Sky One.

However, there is the ever-present question of just how much Coke Zero has cannibalised sales of its sister brand Diet Coke, despite its distinctly female-skewed brand personality. Graham Hales, chief marketing officer of Interbrand, says there is clever logic behind its introduction. “Diet Coke has feminine cues attached to it and people saw it as a healthy soft drink, which is a misnomer so they needed to introduce a single calorie option,” he says.”There will always be the question of the cannibalisation of Diet Coke, but in many respects the introduction of Coke Zero was a defensive move for Coke, to stop people from going to other brands.”

A Coca-Cola spokesman says the volume of Diet Coke has in fact grown 4.7% in the year to July 19 and grown at over 5% in value, according to AC Nielsen. The picture is a more positive one for Diet Coke today than when Zero launched, which in the four weeks to February 2007 experienced a 5.3% slide in volume sales from 29.7 million to 28.14 million litres. This was in spite of the launch of a multi-million pound campaign in January that year to highlight its female positioning, in contrast to Coke Zero’s young, blokey image.

A Coke spokesman maintains that the cannibalisation effect of Coke Zero has been “in line with expectations and was an intentional part of our launch strategy to move consumers who were less engaged with Diet Coke to Coke Zero”.

Rumblings of a global review of the advertising agency arrangements for Diet Coke would also suggest that the company is rethinking its creative strategy. Last year it launched a refreshed “Diet Coke Break” campaign featuring its Diet Coke “hunk”. In spite of speculation over plans to rethink its strategy and drop its “hunk” the Coke spokesman says: “The campaign centred around the idea of perfect Diet Coke moments of female cheekiness, collusion and pleasure seeking. Given the success and relevance of the ‘Diet Coke Break’, this remains our focus.”

Last year the company also launched Diet Coke Plus, a functional drink fortified with vitamins and minerals. But this has had limited success and is understood to have been taken out of the market.

While Stewart remains largely complimentary about his rival, he is less convinced of the need for Diet Coke Plus. His main criticism of Coke is its lack of focus. “They’ve had a go at a lot of things, but I think that’s reduced their focus a bit as well. I think we are a bit more focused, but as the number two player you have to be,” Stewart says. 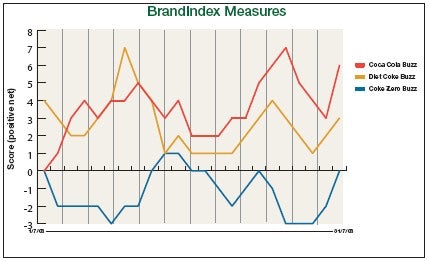