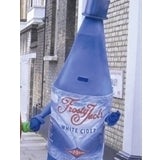 Vegas will provide the voice-over for a series of bumper ads to run at the start and finish of UK Gold’s “Refreshing Comedy” strand, which includes shows such as Little Britain, The Catherine Tate Show and The Office. The ads will focus on the antics of two animated characters, Frosty and Apple, with the slogan: “Until you’ve tasted Frosty’s, you don’t know Jack”.

The deal is worth &£250,000 and will be supported with sales promotions, consumer and trade press advertising, a promotional tour and a viral marketing campaign. The package was negotiated by Starcom, with creative work by Brothers &amp; Sisters.

The brand – which is 7.5% ABV, and the UK market leader in value and volume according to AC Nielsen – has been criticised in the past for its associations with under-age drinking, but an Aston Manor spokeswoman says it is trying to move away from any such associations. Although the TV ads do feature animated characters, they will only be shown after the watershed and will therefore not be seen by children, she adds, pointing out that Aston Manor is a member of the National Association of Cider Makers and adheres to its responsible drinking codes.