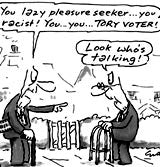 A couple of weeks ago this column noted with interest that the Government’s eccentric experiments in marketing extended to “rebranding” the elderly in preparation for the setting up of a Ministry for the over-50s.

The aim, it was said, was to find a new, trendy name that would appeal to the young, though why anyone should want to do that was left unexplained. Naturally this curious announcement excited speculation as to exactly what thrilling new name, or names, might be advanced, particularly since it was reported that some of Whitehall’s finest brains were engaged in the task.

Well, now we know. According to leaks from Government sources, the new names for most pensioners are “racist” and “Conservative”. At first sight, both terms seem to lack originality and the exciting zippiness that we were promised. Against that, it must be conceded that they will probably achieve their objective of appealing to the young.

The new brands were not coined by the finest brains in Whitehall, far from it. They were the idea of a man the quality of whose brains is anyone’s guess. He is Mr Clive Soley, chairman of backbench Labour MPs, and he is reported to have told a private party meeting that most OAPs are racist and Conservative. He has a point. Most of today’s pensioners grew up in a country where race was not an issue because 50 years ago we were all more or less of the same race, and maybe they preferred it that way. As for Conservative, it is an observable fact that, allowing for a few exceptions, with age comes a weariness of change and a growing conviction that yesterday is preferable to today.

But if Mr Soley’s meditations on age are in one sense unexceptionable, in another they are revealing, since they confirm the suspicions of those of us who have thought all along that New Labour had not quite got the hang of this marketing thing. Perhaps someone ought to explain to them that there are crucial differences between branding, in the sense of conferring extra value, even mystique, on a product, and branding in the sense of labelling someone a liar or a thief. It is becoming plain that New Labour does not much care for the elderly. This may be to do with the fact that older people are less likely than the young to be hoodwinked by the pretensions of government. After all, by the time you reach a certain age you have seen the passing pageant of politicians of all stripes and reached the conclusion that one donkey is much the same as another. But there are also signs that what Labour hates most about the elderly is that too many of them are having a jolly good time. And if there is one thing that stirs the deepest resentment in the hearts of politicians whose credo is compassion it is the sight of people enjoying themselves. In the good old days when pensioners could be relied upon to be poor and willing supplicants of the State, they were welcomed into the heart of Labour. But in this piping time of peace when grim-visaged class war has smoothed his wrinkled front and now, instead of mounting barbed steeds to fright the souls of fearful adversaries, capers nimbly in a lady’s chamber to the lascivious pleasing of a lute, pensioners are too rich, independent and self-willed by half. What they need is the smack of a firm government. And here it comes.

A Downing Street report called Active Ageing calls on the new generation of affluent over-50s to do more voluntary work. Ministers believe older people spend “too much time on golf courses and cruises” and not enough on helping others.

“There is a vast range of things that people in this age group can do,” says an official. “Most of them have everything you could want – good health, financial security and all the time in the world. But most of them spend it having a good time on golf courses and Caribbean cruises when they could be putting something back into society.” They should, he added, be taking up voluntary work in schools, hospitals and prisons and acting as mentors to young people.

That would indeed wipe the smiles off their faces and quickly put paid to their good health. But once again it illustrates Labour’s fragile hold on the concept of marketing. In a free enterprise, capitalist society people work for a variety of reasons, none of which are properly the business of government. In a successful, advanced, free market economy such as ours, people’s requirements go far beyond the basics of food, shelter and warmth, and, odious though it may seem to the puritanical, in many cases extend to retiring early and enjoying the fruits of their labours.

Peter Mandelson, the well-known Labour thinker, is said to have argued that Labour should concentrate on “aspirational voters” rather than pensioners. And what do you suppose those younger voters aspire to? To retire early and cruise the Caribbean or to retire early and help out in prisons?

Of course, in a properly regulated, State-run society of the kind we have seen from time to time in other parts of the world, there is no early retirement and luxuries are solely for the pleasure of the ruling elite. Could that be what the government has in mind?

EasyEverything, the Internet caféset up by EasyJet owner Stelios Haji-Ioannou, is seeking a marketing director to pilot its expansion into Europe.

Blue Sky Brands has made much of its debut magazine for men, called Men’s Quest. It fiercely rejects the bums, tits and flash-cash approach of many other men’s magazines, preferring to target the thinking man. So the Diary was a little surprised to find that the launch party was in the nightclub Sugar Reef, a […]

Chocolate is good for you. Its principal constituent, cocoa, contains numerous trace elements not easily found in any other single source of nutrition. Among them are polyphenols, which research has demonstrated can help to maintain a healthy heart. If the above message had been conveyed through the Lancet or Yale Journal of Biology and Medicine […]