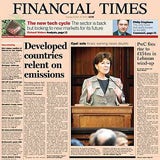 Revenues at its FT Publishing division, which includes the newspaper, dipped 14% on an underlying basis in the nine months to 30 September.

The groups says in a statement that the newspaper “continued to face a weak market” for financial and corporate advertising in the third quarter.

Despite falling print revenues, the group says the division is benefiting from “premium” subscription revenues from online and print users. It adds Ft.com now has 121,000 paying customers, up 22% on the same period last year.

Revenues across the group, which also owns Penguin books, were up 1%, boosted by increases from its North American and International Education divisions.

Marjorie Scardino, chief executive at Pearson, says despite difficult economic conditions the company has “proved its strength”. She adds it will continue to be “aggressive” in pursuing growth in new services and “fast-growing” markets.