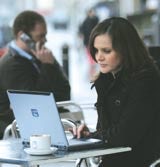 Eades left the Japanese-German joint venture in February to join BT as general manager for marketing. Fowle will take up his new post on April 18.

Eades joined the company from rival manufacturer Dell in 2003. He took over from Mel Taylor, who left to join ViewSonic as vice-president director of marketing for Europe, prompting a marketing restructure at Fujitsu Siemens (MW March 6, 2003).

Fowle, who will report to Fujitsu Siemens UK managing director Steve Kendall-Smith, previously held the position of commercial director at Computer 2000, the UK’s trade-only distributor of IT products and services. It is part of the US-based Tech Data Corporation.

Fujitsu Siemens said it was “thrilled” with the appointment of Fowle. The company, which makes mobile phones, computers and IT equipment, has reported growth in all sectors and has seen pre-tax profits increase by 51 per cent in the past year.