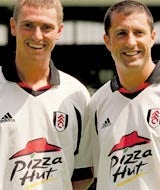 Fulham Football Club has signed a one-year, £2m sponsorship deal with Pizza Hut following its promotion to the Premiership.

The pizza chain has the option of extending the deal for a further two years after the 2001/2 season.

In addition to sponsoring the team’s shirts and placing hoardings around the ground, Craven Cottage, Pizza Hut will back the deal with promotions in restaurants in south-west London.

The deal is performance-related. The club’s ability to win the League and the FA Cup and gain entry into European competitions are key to getting the full £2m. The minimum payment has not been disclosed.

Pizza Hut UK marketing director Bill Ogle admits sponsoring a club just promoted to the Premiership is a risk. But he says: “Our concerns are eased by the deep pockets of the owner [Mohamed Al Fayed].”

The move ends Demon Internet’s three year sponsorship of Fulham FC, which began when the club was in the Second Division.