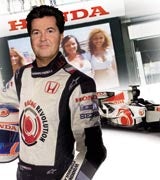 Simon Fuller, the man behind the Spice Girls, is to mastermind F1 Honda team’s marketing, helping it make a blip on young people’s radars. But Formula 1, with its internal disputes and complex rights structure, won’t be a smooth ride for the pop impresario, says Barny Stokes

When Nick Fry, chief executive of the Formula 1 Honda Racing, was deciding on a new marketing strategy to drive the team forward, he considered three possibilities. He could hire a well-known advertising agency from one of the major networks; use a specialist sports marketing outfit; or try something “entirely different”.

In the event, he plumped for the last. “We just didn’t see any point in pursuing the same route as everybody else,” Fry explains. “Not because agencies wouldn’t have done a good job, but because we felt that they wouldn’t have differentiated us from other F1 teams, or other sports.” As such, Fry did indeed do something completely different/ he approached 19 Entertainment, the company run by Simon Fuller – the man behind Pop Idol and the Spice Girls.

Fuller, of course, is renowned in the entertainment industry. Aside from giving Baby, Posh, Scary, Sporty and Ginger Spice a worldwide stage, he also manages Annie Lennox and the Beckhams. Meanwhile, 19 and its partner companies count Madonna, U2 and Kylie Minogue among their clients. Fuller feels his experience in managing celebrities could be useful in F1, especially with regard to Honda’s hottest property – 26-year-old British driver Jenson Button.

“F1 is this amazing, spectacular, sexy sport, on top of which you have drivers like Jenson, who is on the edge of being a true sports icon,” says Fuller in an exclusive interview with Marketing Week. “The sport has enormous global appeal, but at the moment it is not on the tip of everyone’s tongue, and maybe that’s something I can change.”

Fuller coyly suggests it is “too early” to say exactly how he will market the Honda team, which also features dynamic Brazilian driver, Rubens Barrichello. But he emphatically rules out a Formula 1 reality TV show, stressing that he wants to find another way of attracting a younger audience. “I’m not going to do anything to belittle F1, but I do think I can offer Honda an understanding of how to reach a younger market,” he says. “I don’t think the idea of being a racing driver is necessarily at the forefront of youngsters’ minds these days, but it could, and maybe should, be.”

It’s a point that Fry strongly agrees with. “I think Formula 1 is seen as too exclusive,” he says. “It’s seen as expensive, hi-tech and somewhat esoteric, and perhaps not as accessible to a lot of people as it might be. What we need to do is put together a product that is going to appeal to a 14-year-old, who’s probably more interested in pop music or snowboarding than F1.”

For observers, it’s a strategy that makes sense. Many agree the sport has not been particularly adept at marketing itself, despite the fact that the technology involved is potentially very exciting in itself. In particular, they point out that F1 cars are incredible feats of engineering. Using the same principle that creates lift under aircraft wings, only in reverse, they create a downward force of up to three and a half times their own weight. This means that, theoretically at least, at high speeds, they could be driven upside down along the roof of a tunnel.

“The problem is the technology is not understood by most people,” says Andy Philpott, F1 global practice leader with sports marketing agency PRISM. “F1 can be hugely exciting but the experience isn’t being brought to them.” However, while Philpott and others agree that Fuller could bring a fresh approach to marketing Formula 1, they also point out that he faces some serious problems exploiting the sport, mainly due to its notoriously complex rights structure.

Formula 1’s governing body, the FÃ©dÃ©ration Internationale de l’Automobile (FIA), leases all the sport’s commercial rights to Bernie Ecclestone’s Formula One Group. Ecclestone in turn sub-leases the rights to sell trackside signage, title sponsorships and VIP entertainment, but retains the lucrative TV rights. However, he is in the process of selling 75% of the Formula One Group to venture capitalist firm CVC Capital Partners for a reported &£600m, in a deal that will leave him as chief executive of a new company, Alpha Prema, which will run the sport.

The relationship between the FIA, Formula One Group and the teams is governed by a constitution of sorts, known as the Concorde agreement. But that is set to expire later this year and has been a source of considerable friction in recent months. In particular, several key players believe they are entitled to a greater share of the commercial rights income, which has led to five of the manufacturers’ teams (including Honda) threatening to start a rival championship in 2008.

Added to which, some of the most famous race venues, such as Silverstone, are struggling to meet the costs of hosting a Grand Prix. Critics say the problems have not only worried some existing partners but have also put off potential new ones. “I think it’s fair to say that the unresolved tensions in the sport are creating concern at the board level of some sponsors,” says Ian Forbes, managing director of the Stephane Ratel Organisation, the promoter of the FIA’s GT racing series.

Despite these issues, both Fry and Fuller remain upbeat. Fry says he expects a new Concorde agreement will be signed within a few weeks, while Fuller neatly sidesteps the entire argument by stressing that he will focus on pre- and post-race promotion, as opposed to having anything to do with the events themselves.

In fact, far from worrying about how F1 is currently perceived by prospective sponsors, Fuller hopes to attract new partners, such as lifestyle brands, to the sport. “F1 should be all about the fans,” he says. “They’re living lives, driving cars and using mobile phones. So why can’t we put Levi’s on a car, or Gap, or Apple?”

Whatever Fuller’s approach turns out to be, he could become a new, driving force at the wheel of Formula 1.