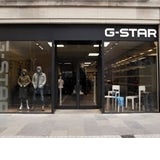 Fashion clothing brand G-Star is embarking on a global brand push as it continues to move beyond concessions and opens standalone outlets.

Its first London store, in Covent Garden, will open early next month.

G-Star plans to open a further 76 outlets around the world by the end of the year in what is the Dutch brand’s biggest brand push to date.

A print and outdoor campaign, developed and co-ordinated in-house, will support the roll-out.

The 2,500sq ft, two-storey London outlet is a converted warehouse that is 200 years old. G-Star says it reflects the stark, design-led ethos of the brand, which is known for innovative denim fashions.

The store interiors are designed to reflect the stylish, functional ideals of the clothing. Every aspect, from fitting rooms to lighting, has been developed by G-Star.

As part of its expansion plans, the company is also rolling out the G-Star Retailormade store concept, which enables people to open their own G-Star store.

A spokesman for the company says: “G-Star Retailormade partners are supported on a day-to-day basis, to build up a profitable business and a strong brand presence in the most important cities of the world.

“The concept ensures a win-win situation for both parties involved in the creation and development of a new business.”