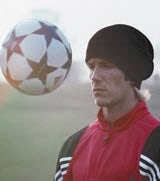 A galaxy of international football stars take centre stage in the latest Adidas global football campaign created by Amsterdam-based agency 180/ TBWA. The campaign, which breaks on August 1, features Real Madrid players David Beckham, Zinedine Zidane, Ra£ â¢GonzÃÂ¡lez and Arsenal star Patrick Viera plus several others. It revolves around the idea that to win, players have to own the game. A 45-second cinema ad and 30-second TV spot come from the ball’s perspective, and look at the different methods that players use to win. A print and poster campaign highlights the individual players and relates to their own style of play – the strapline on the Beckham execution is: ‘Newton. Einstein. Beckham. Own the laws of physics and you own the game’. Media planning and buying is handled by PHD.