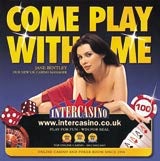 Gambling authority GamCare and children’s charity NSPCC have criticised online gaming company InterCasino for a CD promoting its website, fronted by a scantily clad woman, which was inserted in Saturday’s Guardian newspaper.

The CD came in a cardboard wrap, featuring several pictures of the woman and the words “Come Play With Me”. Inside the wrap, the company says that customers can chat to the woman “live most evenings at the tables” and can play games free, without having to register for an account. Age restrictions are only mentioned in the small print on the back of the wrap. Recipients can also register to play the same games for money.

The criticism comes days after GamCare and children’s charity NCH published a report showing that 30 online gambling sites failed to prevent a teenager from using their services.

GamCare chief executive Peter Collins says such indiscriminate marketing tactics in a national newspaper are irresponsible. He says the forthcoming Gaming Bill will put a stop to such advertising: “Underage gambling is a serious problem. It is precisely this sort of thing that the legislation will stop.”

Collins adds he is surprised The Guardian would send out such a CD: “Does The Guardian allow other adult services to market through its mailing?”

A Guardian spokeswoman says: “We check every insert and it was approved by the Committe of Advertising Practice.” InterCasino was unavailable for comment.

An NSPCC spokeswoman also expressed concerns over the site, which she says could lead to children establishing gambling habits even if no money is involved. She adds: “They potentially have the opportunity to chat to adults on the site, which is also a major problem.”