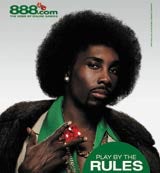 As the global online gambling market takes off, 888.com is bidding for the top slot, combining all its brands in one campaign. By Jonathan Harwood

Gamblers heading online in search of a casino or poker school are met with an even more bewildering array of choices than arriving in Las Vegas. Players must pick from sites including PartyPoker, Paradise Poker, Prima Poker and PokerStars among many others, so standing out from the crowd can be the biggest problem a brand faces.

That is one of the reasons online gaming giant 888.com, which runs the fourth biggest internet poker site, Pacific Poker, has begun the process of unifying its different gaming brands under the 888.com umbrella (MW last week). The Gibraltar-based company, which gets its name from the lucky connotations of the number eight in the Far East, was founded in 1996 and the following year launched its Casino-on-Net product. It is now the world’s biggest online gambling operation with a database of more than 20 million players across its different brands. In September, it floated on the London Stock Exchange and has a value of &£700m.

When 888.com was launched, the online gaming industry was small, with the US boasting greatest penetration. It is in that market where sub-brands Casino-on-Net and Pacific Poker are best known. The parent brand is better recognised in the UK – most people will be familiar with it in the context of high-profile sporting sponsorship agreements with the likes of Premiership football club Middlesbrough.

This month, the company will launch its first generic advertising campaign to promote 888.com rather than its sub-brands. The &£1m-plus UK drive has been created by London-based agency Bear and planned by All Response Media. The strategy will be copied in other markets, and although the company will not reveal its marketing budget, analysts estimate it to be in the region of $100m (&£57m) globally.

Itai Pazner, global offline marketing manager for parent company 888 Holdings, explains: “Having one consistent and clear brand message is extremely important in such a cluttered market. Even people in the industry get mixed up with the different brand names.” However, he stresses that brands such as Pacific Poker will be retained but renamed, for example as 888 Pacific Poker, because they have a loyal following.

Gambling.com managing director Tim Rosenberg says the company has made the right decision. “A few months ago it had a number of brands but there was no consistency in communications,” he says. “Clearly, the main brand was 888.com itself, so from a marketing perspective it makes a lot of sense to concentrate on it.”

Although 888.com will become one brand, Rosenberg says its strength lies in its range of products. “PartyPoker [the biggest poker site on the Web] is arguably a bit one-dimensional,” he says. “888 is not reliant on a single product.” He comments that Sporting Bet – another of the big players – recently diversified, buying up Paradise Poker to complement its existing casino and betting products. Rosenberg draws an analogy with Coca-Cola, saying 888.com can operate a number of variants, easily identified with the core brand.

However, observers say the price that 888.com pays for being a big fish is that it is not agile in the marketplace. “It is the biggest and oldest, and has spent the most on marketing, yet has not always been the most dynamic or trailblazing,” comments Rosenberg. “But it is likely to be around for the long term.” He says the new strategy, which highlights the brand’s strengths, adds to the image of solidity. The flotation has also encouraged the company to make sure it does not overstretch itself.

Pazner agrees. “Stability as a business is something we tried to project from early days,” he says, adding that when people part with their money, they want to know it is being handled responsibly. Whereas once that applied just to the players, it now also applies to shareholders. Pazner adds that the float has not overly affected the marketing approach. “We were always cautious and careful,” he insists.

Online gaming is technically illegal in the US. Paul Telford, a senior associate specialising in gaming law at Allen &amp; Overy, says now would be a good time for 888.com to establish itself in the US because if it is legalised, the market could be flooded. But Pazner denies the US situation has affected the company’s thinking.

As a major, respected player in the sector, 888.com is even being tipped as a stock to watch this year. There has also been talk of a buyout by Ladbrokes, which recently sold its interest in Hilton Hotels and will now focus on gambling again. 888.com’s umbrella branding has won industry approval and although some predicted the demise of internet gaming last year, the company’s share price has recovered after the slump.

â¢ In 2002, the online gambling site had around 3 million members. It now claims to have more than 20 million names on its database

â¢ Pacific Poker is the fourth-biggest poker site on the Web (behind PartyPoker, PokerStars and Poker Network). Casino-on-Net is one of the world’s biggest online casinos

â¢ 888.com is operated by Gibraltar-based company Cassava, part of 888 Holdings and listed on the London Stock Exchange