Gap says the new ‘dress normal’ strapline will be used in future campaigns as the brand looks to bring more consistency to its communication. It is the first marketing to launch since Gap began working with Wieden+Kennedy with the aim of promoting a more coherent brand globally, rather than launching different campaigns in different markets.

The campaign, which launches later this month in print, social, digital and in-store, features actors including Angelica Huston, Michael K. Williams and Elisabeth Moss who Gap claims are recognisable for “dressing normally”. The print ads will run globally in countries including the UK, US, Japan and Italy and challenge people to “dress like no one’s watching” and “let actions speak louder than clothes”.

Gap is also planning a return to TV screens and will be launching an experiential element that will see pop-up shop visit five different US cities.

The brand’s Styld.by platform will be updated with more video content and input from creative influencers including musicians, filmmakers and artists on their interpretation of the big autumn trends and how they dress normal.

Gap is famous for its take on modern wardrobe classics – including jeans, t-shirts and hoodies. Seth Farbman, CMO at Gap, says the new campaign is rooted in Gap’s core values of individualism and giving people the confidence to dress for themselves.

“Finding your own version of ‘dress normal’ is an art – my normal is different from your normal, and that’s the essence of the campaign. This fall, Gap celebrates dressing for yourself and finding those perfect items – a pair of jeans, a t-shirt – that make you feel confident to be your most authentic self,” he says.

Gap has returned to emphasising its core range in its marketing in recent years as it looked to turn around sales declines between 2007 and 2011. The brand was criticised at the time for its safe approach to fashion and saw rivals such as Uniqlo and H&M take the initiative.

Its spring 2014 campaign focused on a “Lived-In” theme while last autumn’s ads aimed to highlight its heritage with a “Back to Blue” message.

The marketing push comes as Gap sales look to be faltering again. It had posted positive sales growth globally through 2012 and 2013. However, sales were down 5 per cent at stores open for more than a year in both the first and second quarters of this year.

Snapchat is to expand from being an ephemeral photo and video messaging app to a service that serves up news, TV clips and advertisements, according to a report. 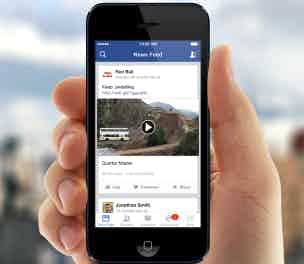 Without fanfare, Facebook this month doubled the number of times users can see an ad in their News Feed from a page they are not connected to from one to two ads per day, a move industry observers say could prove a “double edged” sword risking kickback from the marketing community.