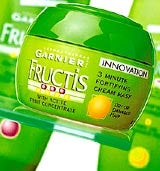 Laboratoires Garnier is planning the launch of its first Fructis styling brand – Fructis Style. The Garnier Fructis range, manufactured by L’OrÃ©al, has until now included only shampoos and conditioners.

Fructis Style will be backed by a £3.5m campaign, created by Publicis with media buying by Universal McCann. Both campaign and product will be rolled out at the end of this week.

The new “mass market” brand will comprise 14 styling products, including hairsprays, styling mousse and “fibre-gum” gel, and is aimed at 16-to 24-year-olds.

Garnier Fructis group product manager Andrew Stanleick says: “This is the first time that Fructis has used salon technology, and is its first step into the hair-styling market.”