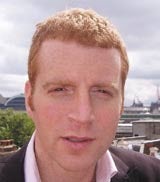 GCap Media has promoted Ed Chalmers to head of agency sales. He replaces Nick Hewat who was poached by Virgin Radio earlier this year.

Chalmers, who will take over the role immediately, will report to group sales director John McGeough. He will be responsible for creating a focused agency sales team and providing new solutions for national agencies and their clients.

Chalmers has been promoted from the role of head of network sales, a post he has held since the merger of Capital Radio Group and GWR Group in May. He was formerly head of trading at GWR sales house Opus, where he had been since 1997.

Hewat left the company in June to take over as sales director at Virgin Radio. He replaced Lee Roberts, who left the SMG-owned station in May following the appointment of former Yahoo! managing director Fru Hazlitt as chief executive of the station.

A new low-fat flavoured milk drink range called Slammers is set for a Â£1m launch on the back of the success of The Fantastic Four movie.

William Hill and Puma are the latest brands to sign up as sponsors of the Rugby Football League. They join NestlÃ© Rowntree’s Lion bar and Interbrew’s Castlemaine XXXX, which became the first RFL sponsors last month (MW July 14). Branding from the bookmaker and the sportswear manufacturer will feature at all Super League matches for […]