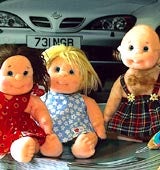 Just occasionally, a press release lands on the Diary’s desk which deserves a second read before it goes in the bin. One such has arrived from Nissan.

Seemingly, the Nissan press office is going out of its mind through overwork or boredom. To announce the appointment of new PR administrator Andrea Lowther, the team issued a press release which appeared to consist of a five-year-old’s ramblings.

“We’re looking forward to Andrea shedding some light on just what this PR lark is.”

The release was accompanied by a photograph of four rag dolls. God only knows what was going on in the press office, but the Diary can only hope the team didn’t drive home that night.

British Airways Holidays head of sales and marketing Colin Whaley has been appointed to head the marketing team at Accoladia, the company formed by the merger with Thomas Cook Holidays. The two holiday giants announced their plans to merge last December, and made it clear that both brands would remain in existence and run alongside […]

Auction site Ebay.co.UK is following the lead of its US parent by moving into fixed-price, person-to-person retailing. The company has appointed Tanya Cordrey to the position of director of market development, who will spearhead the move. The appointment follows the introduction of a “Buy it Now” facility onto the site. This service enables sellers to […]

A survey obtained by the Diary this week reveals that marketing professionals’ fantasy boss is Dame Judi Dench’s character “M” in the James Bond films. Career psychologist Siobhan Hamilton-Phillips says the choice of M suggests that marketers “take their jobs seriously”. Proof, if any were needed, that career psychologists know naff all. Interestingly, Dench was […]