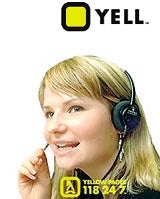 You may have noticed the current onslaught of advertising that’s all about numbers. From August 24, dialling 192 will no longer take you to the familiar BT directory enquiries (DQ) service, and a host of providers are vying to make their number the one you call instead. Each claims to offer some point of difference – low pricing, simple pricing, Welsh language, call completion or a reliable, comprehensive service.

Only two of the holders of Oftel’s new DQ licences, BT and Yell, are traditional UK directory publishers. Others include Cable &amp; Wireless, Orange, US company InfoNXX, One.Tel and Telegate.

So what is BT doing to ensure it continues to dominate the market? Its first move – a year ago – was to buy ailing online directories business Scoot.com, which brought with it a database of classified business information.

“The new service, 118 500, will be bigger and better than 192,” explains BT Directories marketing director Simon Lubin. “You will be able to search by business type and find information on local cinemas, for instance.”

BT is also offering to text numbers to mobiles, a service pioneered by Orange and now offered by many DQ companies.

“As the market matures, we’ll be introducing other information services,” adds Lubin. “But you have to ask whether people will change the habits of a lifetime when it comes to getting information. Would they be interested in using the service to find out the football results or the weather forecast?”

For its part, Yell is stepping into BT’s traditional territory by offering residential numbers as part of its revamped Talking Pages service, now known as Yellow Pages 118 24 7. Its aim is to remain the “premier classified information service”, says Nick Hartnett, Yell’s head of marketing for advertiser development.

“Our research found that 40 per cent of users wanted additional information but weren’t offered it,” he adds. “So now we offer more information on businesses, such as opening hours, location details, products stocked and whether they accept credit cards.”

Yell’s highly regarded local cinema service offers information on screening times as well as plot synopses. Yell is considering adding information on other social activities and venues, such as theatres.

The UK’s other major classified directory publisher, Thomson Directories, did not apply for one of the DQ numbers. However, it is cashing in on the deregulation by selling information to other providers, such as Cable &amp; Wireless, and Telegate’s 118866, which is owned by Thomson’s Italian parent, Seat Pagine Gialle.

The DQ arena is not the only aspect of directories in which there is a flurry of activity. Publishers are constantly exploring new ways to make use of the information they have on file. Since its acquisition of Scoot, for instance, BT has started to put classified sections in its phone books. Half a dozen new-style directories, including York and Southampton, have been published so far, and 100 more will be rolled out this year. BT plans to have the whole country covered by March 2004.

“The nature of the classified market means that you have to clean the data continually,” says Lubin. “We have done a huge amount of work to improve our list. We’re offering quality data and a simpler number of classifications to make searching easier.”

He adds: “Our focus is local, so we’re trying hard to make the information relevant for each area using a mixture of qualitative, quantitative and demographic information.”

Thomson Directories is also exploring new printed products. In December 2002, it published Thomson WebFinder, a directory of Web addresses that was distributed to 300,000 homes and businesses in central London, and through easyInternetCafés. The 5,000 addresses, compiled from the most heavily used online products and services, can be searched by company name or through classified headings.

“It has been well-received by advertisers and we’re going to repeat it at the end of the year,” says Thomson Directories marketing and strategic director Kendall Gordon. “It proves there is room for printed products about the Web. People say it’s useful to have this book by the PC and the main Thomson directory by the phone.”

It would also make a useful Web product, of course, and Thomson is developing WebFinder.com, to provide the same information online.

In spring 2002, Thomson launched ThomsonLocal.com, which Gordon describes as the online companion to its print directories. “It’s searchable by name and postcode and the results come back ordered by proximity to the user.”

Both WebFinder.com and ThomsonLocal.com are using the fast-growing pay-for-performance or pay-per-click online advertising model, whereby advertisers bid for keywords to secure them a prime position in the results screen. Thus the business that offers the most money for the keywords “plumber” and “Birmingham” will appear at the top of the list when a user searches for those words. Advertisers pay Thomson according to how many users click on the link to their site.

Thomson is also seeking to sign agreements with major search engines to embed WebFinder into their sites.

“As we add to our own data, we’re always looking at line extensions to make use of it, by making it available to other commercial organisations,” says Gordon. “We’re collecting URLs and e-mail addresses, for instance.”

Two years ago, Thomson launched New Connections, a subscription product available electronically or on cards. It lists information about businesses that have moved or started up, so that companies such as furniture distributors can pick up useful leads.

Yell, too, is constantly developing its products. Its website, Yell.com, was given a makeover earlier this year, to make its information much more locally based, explains Harknett. Banner advertising is from local traders.

Kelly’s Directories, which publishes purchasers’ and specifiers’ reference work Kelly’s Industrial Directory, has also started to produce CD-ROM and Web versions of its products. Kellysearch.com, launched in 2001, now handles more than 500,000 searches a week and provides 80 per cent of Kelly’s revenue.

“With books, it’s hard to prove a tangible response,” says Kelly’s marketing general manager Tony Millen. “The Web enables us to show people what their advertising pound is doing for them, by monitoring the traffic. However, we don’t want to stop producing the hard copy. We still have a circulation of 90,000.”

The directory is free to purchasers, as is the website, but Kelly’s sells its lists to other organisations and has launched paid-for spin-off titles for sales and marketing professionals.

Another source of revenue comes from providing embedded search boxes on other companies’ websites. For instance, Contract Journal magazine has just launched its own search facility for the construction industry, powered by Kellysearch.

“It’s an opportunity to get into markets we’re not already strong in,” says Millen. “We’re not so strong in construction, so this gives us a chance to expand our user base and get more advertising.”

Jane’s Information Group, which publishes defence and aerospace guides, such as Jane’s International Defence Directory, has expanded its list greatly since its foundation a century ago. It now produces some 50 publications covering areas from amphibious warfare to world armies.

“Print will not die, but online is the way forward,” says a Jane’s spokeswoman. “There’s so much information available free of charge on the Net, but it’s hard to navigate and it takes a long time.”

Jane’s books are available in hard copy, on CD-ROM and online, with subscribers paying a premium for online access.

“Five years ago, the split was probably 80/20 hard copy versus electronic. Now it’s more like 50/50,” adds the spokeswoman. “We sell CDs to developing countries, in Africa and the Middle East, but even these areas are developing online access fast.”

Jane’s drive is towards “continuous flow”, where editorial teams are no longer locked into an annual publishing cycle, but provide constantly updated information via the Web and secure intranets. Subscribers can also use “cybercash” to pay online for Jane’s products.

Jane’s has even expanded into training and consultancy, particularly for countries and companies concerned about security and terrorism.

But not all diversifications are successful. The UK magazine Jane’s Police Review has been going for more than 100 years, but Jane’s attempt to make the subject more international did not work out. It launched Jane’s CopCase, a database of case studies for police officers around the world, but found that law enforcement across the globe is too diverse to be fitted into a single structure. And the case studies, which were supplied by police forces, were too inconsistent to make comparison useful, says the spokeswoman.

A book on road traffic management was also ditched since it was considered that the subject matter was too far removed from Jane’s core markets.

Thomson, too, has back-pedalled on some products that is has tested. It carried out a trial, in Surrey, of an online product called My Blue Cat. Users could put in a request, such as “I want a conservatory built”, and local businesses could bid for the work.

“We got the number of businesses we wanted and we got users for the service,” says Gordon, “but the number of users and advertisers who loved it was too small, so it wasn’t worth rolling out on a larger scale.”

Clearly, not every innovation is going to work, but it is essential to keep exploring new avenues and ways of using data. Sticking only with what they know – or with good old print – will leave directories publishers far behind as rivals continue to pursue novel ideas and delivery channels.