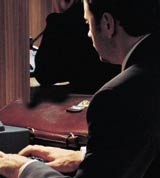 Some of the world’s leading companies have invested heavily in customer relationship management systems over the past decade, implementing them with varying decrees of success. Globally, some $2.3bn (&£1.4bn) was spent on CRM in 2002 and this will nearly double by 2006 to $4bn (&£2.4bn) according to Datamonitor. But the researcher warns that many users are confused about CRM as different suppliers have varying definitions of what it can do.

Many blue-chip companies have bought systems from the likes of SAS, Siebel and Microsoft and the top end of the market is becoming saturated. Now the suppliers are turning their attention to small and medium-sized enterprises (SMEs), but Datamonitor warns that companies should be careful about claims that the software can work immediately before being tailored to the specific needs of each business. The researcher says that few markets have suffered as much from “vague vendor marketing messages” as has that for CRM solutions.

Still, the potential for sales in the SME market is huge, according to Ben Kiker, global marketing director at software seller Onyx. He says only about one quarter of SMEs have any sort of CRM systems.

It is not hard to see why SMEs may be reluctant to adopt CRM software. The systems can be cumbersome and expensive. Incurring extra costs is the last thing most SMEs can afford, unless, of course, the systems really do help to recruit and retain more customers. The ability to maintain up-to-date customer data and use it in a variety of ways can be the route to success. But finding out whether the systems work or not can be costly and painful.

There has been much criticism of the biggest CRM providers, who have been accused of “hijacking” what is a basic business function. There have been dark prognoses that much of the spending on CRM has been wasted as companies failed to make best use of software. It is little surprise that SMEs are wary of getting involved.

To add to the confusion, there is a maze of CRM offers, with software providers, agents and data consultants all eager to push their systems. Businesses have to choose whether they want off-the-shelf packages or tailored software and which suit them best. Then there are issues of staff training and after-sales-service to consider. And above all, the companies need a way of working out whether CRM software is a worthwhile investment, and measuring the return on that investment.

While the biggest corporations’ CRM needs are serviced by the likes of Siebel, Oracle and IBM, some feel there is not much suitable software available for SMEs. Then again, software is not always the answer to the problems faced by many businesses and should not be treated as a panacea.

Many companies can do without expensive software to sort out their CRM problems, according to David Barragry, senior business development manager at Swetenhams. “Most people view CRM as a piece of software, and it isn’t. You have to set objectives on what you want to achieve and build around those. That may or may not involve using a piece of software,” he says. He gives an example of a retailer which was concerned that a lot of callers were failing to get through to place orders at the call centre. The retailer asked Barragry if there was software that could tell what time most of these calls were made, and provide a means to solve the problem. But Barragry said it was not a problem that software could solve – the retailer simply needed more call centre staff .

“CRM is about getting and keeping customers. It could be as simple as sending out a letter saying thank you for placing an order. If you step back from the hype, CRM is about increasing customer loyalty and acquisition rates,” he says.

One of the problems with ready-made software for SMEs is that much of it will be either over or under-specified for the companies using it. “Companies that have invested money in an off-the-shelf package may find it falls short of what they want it to do. Or the software may do what they want but it doesn’t allow them to work with the data,” says Lee Waite, commercial director of database solutions company Conduit. But Waite believes technology can only solve 20 per cent of a company’s needs. The bulk of resources should be concentrated on working with the data, making sure it is clean and accurate, but also analysing it to define and target the best prospects.

The biggest companies buy systems that can do everything from storing data to profiling and modelling. The most basic level of CRM software is little more than a list of names and addresses – some companies even rely on Excel spreadsheets. There are popular CRM packages, which offers a basic name and address – “contact management” – system.

Trying to work out which is the most appropriate software and how best to use it can be a minefield. But most CRM advisers say it is best to start off gradually, testing software for one set of needs before extending it to other areas.

iSKY Europe head of sales and marketing Maggie Evans says: “The way CRM is implemented is changing as companies learn to avoid the big-bang approach and implement it on a more realistic scale. Starting small is usually a more useful and considered approach than installing company-wide systems which, quite simply, will fail if not supported by an internal culture.”

Evans was involved in a scheme with a division of a utilities company about the size of an SME that used CRM to look at the trigger points leading to a loss of customers. It was having a problem with people signing up and then dropping out within the 14-day consideration period. Through profiling these people, they were able to identify those customers least likely to drop out and target them. The way was then open to use the CRM for wider purposes.

Breaking down implementation and clearly defining one’s objectives are the all important initial stages in implementing CRM. But at the heart of it lies a database which in the words of Bill Burey, director of CRM and subscriptions consultancy CCB-Profits from Data, is “capable of holding a single view of customers”. He believes that once the database is up and running, moves should be made to identify the “quick wins” that can be achieved.

While CRM software offers great potential for dissecting customers into groups it is a complex area with many pitfalls.

For SMEs, building up expertise on CRM software and finding advisers that can identify the best ways to use it for the company concerned are essential. Tailoring the software to the needs of the business can be constructive, but usually turns out to be expensive.

If you are a manager of a mid-sized business, you are a prime target for the fast-talking sales patter of CRM promoters, so now is the time to find out the pitfalls of installing CRM software before being persuaded to make any significant investment.