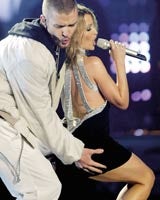 Corporate hospitality events are a staple of many companies’ marketing arsenals, but they can be expensive. Steve Hemsley tells us how to save money on the organisation and make sure the events are memorable money-spinners

Pop star Justin Timberlake was described in the tabloids as the luckiest man in Britain last month when he grabbed Kylie Minogue’s bottom during their duet at the Brit Awards.

Later that night Kylie and Justin appeared at an EMI corporate party at the Sanderson Hotel in London, where record company staff and key clients shared wine and nibbles with the diminutive Antipodean pop diva and the US artist, keen to make the headlines to promote his solo album.

Most corporate events are not so glamorous, but there is growing pressure on companies to demonstrate the positive impact on their business of such targeted entertaining.

One agency reportedly spent &£40,000 taking some of its best customers to the Brits, where tickets cost up to &£1,000 a person. It might have been fun to mingle with pop stars at the after-show party, but the agency’s accountant will not be dancing on tables if the activity is not financially rewarding.

According to a report by Mintel, the corporate hospitality sector grew by 19 per cent between 1997 and 2002, helped by the integration of such occasions into many CRM strategies. Times are tougher now, with some event companies predicting that budgets will be cut by 20 per cent this year.

The economic uncertainty has prompted the Corporate Event Association to call for more scientific methods of evaluating return on investment. The CEA says it is no longer sufficient to count the thank you letters as a guide to an event’s success. Instead, the effect on business growth, customer retention and market share must be assessed closely.

It has always been tricky to measure the profitability of corporate hospitality or a product launch. Malcolm Williamson, CEA board member and chairman of motivation and communications company The TM Group, suggests that the most effective way to gauge success is to set clear objectives while planning and to weigh up afterwards if these were met. Marketing teams should question what the objectives of the event are and how they support the aims of the business, whether they reflect the culture and expectations of the audience and whether the marketing team is sufficiently aware of them. They should also question how any feedback would be evaluated, distributed and acted upon.

Management consultancy Customer Champions works with a number of blue-chip clients that are struggling to measure the marketing benefits of hospitality. Director Colin Bates believes these companies will be tempted to divert some of their event budget into other disciplines such as direct marketing, telemarketing and advertising this year.

“Often clients seek feedback on issues such as the quality of the catering, rather than trying to identify whether an event has changed customer perception or brand awareness,” he says. “They need to ask themselves questions such as ‘Who was invited?’ and ‘Who actually attended?’.”

When budgets are being scrutinised the quality of the guest list becomes more important.

Some companies cancel events at short notice because the executives they invited cannot attend and the ones who accept in their place are not important enough to justify the costs involved.

“You need to make sure you invite the rig

ht people, not just the ones who attend every year. They may be your best customers but it might be better to invite potential clients. If it is a staff event it can be tempting to focus on the key achievers, but what about future ones, who also need motivation?” says Williamson.

Tina Morris, events managing director of Skybridge Group, says her company will gather data on a client’s important customers over a period of time, to ensure the right people are invited to the right event. She says: “We study every detail with a client to find out why they want to launch a product to a certain market so we can help them with the invitations, the venue and the timing of the event.”

Many companies find it difficult to save money without giving guests who have attended previous events a negative impression of the brand.

“There are ways around this,” says John Denham, managing director of international event company VantagePoint. “For instance, a company can take clients to a European city rather than a long-haul destination. If the location and activities are different each year, guests will probably not notice that you are saving money.”

Companies are shifting responsibility for the finding and booking of venues to their internal communications teams. Event management companies will need to become more flexible or they risk losing clients that may only want to outsource the actual production of an event.

However, the internal communications team needs to have booking experience in order to strike the best deal with a venue. Any lack of communication between the staff members who organised a previous event and the team handling arrangements this time could lead to a waste of time and money.

Nigel Woods, managing director of Abel Business, says that companies should keep records throughout the event to ensure the smooth transfer of responsibilities.

“We find that the person co-ordinating an event often resides in the human resources department or is a director’s secretary or PA, but the point of contact may change from year to year and information does not get handed over,” he says.

The RSVP 2003 show at Olympia National Hall on April 2 and 3 is aimed at corporate event managers of varying experience and the exhibitors will include venues, caterers and production companies.

Venues have also had to adapt to the changing economic climate as lead times for bookings shorten and negotiations with suppliers such as caterers get tougher.

Dressing up a corporate event

Theme park Alton Towers will open a dedicated 550-seat conference centre and a second on-site hotel on June 1. Sales manager Helen Johnson says: “We are hoping to benefit from corporate clients who save money by not going abroad for conferences. The theme park is our big selling point but we are also a serious conference venue competitor in the Midlands,” she says.

BT, Hewlett-Packard and Coca-Cola are among the clients to use Alton Towers, where delegates often attend conference sessions in the morning and use the park in the afternoon. Between November and April, when the park is closed to the public, clients can hire the entire site.

For companies looking for something less strenuous there are corporate hospitality packages available for Wembley Arena’s music events. “People do not always think that corporate entertaining is available at concerts, but the reception beforehand allows a free flow of business ideas in a social environment,” says Wembley Arena’s senior commercial and marketing manager Julie Warren. “Measuring the effect on business is hard without sending out feedback forms afterwards, but that would be inappropriate. These events are not there for the hard sell: they are there to strengthen relationships.”

Entertainment for a song

The concern with music, as with sport, is that a failure to research sufficiently the interests of the target audience might mean an important buyer politely declines the invitation if he or she is not a fan of the band performing.

One of the most popular venues in London at the moment is The London Studios, where companies can hire the studios used for ITV shows such as Popstars: The Rivals and Ant &amp; Dec’s Saturday Night Takeaway. The 650-capacity studio has been booked in the last few months by Camelot and Lloyds TSB.

Business development manager Darren Ziff says costs can easily be controlled. “Clients can decide whether or not to use the cameras and we can build set designs to any budget,” he says.

When planning an event, a balance must be found between being creative and original and reining in costs wherever possible. If clients can identify a clear benefit from entertaining their customers and staff, then budgets may move upwards again. That would be music to the ears of everyone in the events business.

RSVP runs at Olympia, London from April 2 to April 3. The show covers all aspects of event management, from catering to entertainment ideas.

Highlights of the show include a new Imaginative Venue Section and an Amazing Effects Theatre.

More than 250 exhibitors, with many different specialities, will be present to showcase their latest products and discuss all aspects of event planning and management.