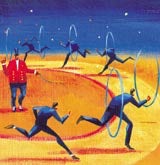 One agency head puts it like this: “It is massively empowering for clients to have very bright agency people jumping through hoops for them.” This is probably why clients relish pitches so much more than agencies do.

Agencies of every description have always grumbled about pitching: the cost in time and money, the lack of feedback, the increasing involvement of procurement departments and the general unpredictability of the outcome. None of this is likely to go away, but the industry is nevertheless witnessing major changes in the way some clients are approaching pitches. These developments may be changing the hoops that agencies have to jump through but they are not necessarily feeling any better about playing the game.

The latest fad in pitching is the workshop, as conducted by drinks retailer First Quench and by Barclays, which famously used this approach to pare down its roster from almost 60 agencies – picked a year earlier – to just five. Workshop pitches involve agency and client staff spending longer periods – a day, for instance – working together.

But is this new route of finding agencies any fairer and does it really give clients better insight into what they are buying? The theory is that more mature clients are no longer interested in sitting through pitches where agencies convince them of their creative, strategic and planning prowess. Clients now assume that agencies of a certain calibre can do all this; what they want to know is: “Are your people going to work well with ours?”

Considering that workshops are a relatively new trend, there is already an astonishing level of indifference to them, even from those who have been involved.

Clark McKay &amp; Walpole chairman Jonathan Clark says the workshop method is another way of evaluating an agency, “but I don’t think you find out more or less about an agency than you would through a conventional presentation”.

One of the main criticisms of the standard pitch is that agencies field their brightest and wittiest employees for the pitch, but then once the business is won they are never seen again. Clients have tried to get around this by insisting that agency business development directors are nowhere to be seen during a pitch and that clients get to meet the people they will end up working with. Both these strategies have weaknesses: agencies still field their new business people in pitches – they just call them something else; and in a world of high staff turnover, agencies can easily sidestep the issue of clients wanting to meet the long-term project team. These weaknesses are evident in the one-hour pitch as they are in the day-long workshop.

Communicator managing director Paul Seligman says that, despite the efforts of clients, there is little that is spontaneous about workshops.

He says: “The only difference between the one-hour pitch and the workshop is that the latter is longer. Agencies do their research and they know what they are going to do before they arrive. Workshop pitches are as rehearsed and orchestrated by agencies as normal pitches are.”

Although 23red managing partner Jane Asscher believes workshops are a good way of measuring the working chemistry between two sides – which is often left out of standard pitches – she says it is yet another process that can be misused.

She explains: “Whether clients ask agencies to respond to a specific creative brief or get the team in for a day, there is still a process that clients should stick to. That includes issues like the number of agencies being asked to pitch, the time frame, the clarity of the brief, and post-pitch communications.”

It is deemed good practice not to ask more than three or four agencies to pitch for a piece of work with a time frame of about five or six months. This never happens with Government-related accounts, which can see up to 30 agencies working for up to a year on winning a piece of business. Nor do the major multinationals, like Procter &amp; Gamble, make light work of pitches.

The bulk of the direct marketing industry had been immune to the vagaries of pitching because, until relatively recently, there was a yawning gap between the small handful of good agencies and the rest. But, according to Craik Jones director of new business Claire Syrett, direct marketing agencies are now much better at presenting themselves and “clients’ ability to differentiate between agencies is less strong. There is a less marked difference between agencies now.”

Think on your feet

Craik Jones has been involved in a few workshop pitches and Syrett believes they work well because they force agencies to think on their feet.

“But if you go too far down this route, agencies will just bring through people who work well in a field situation. I also don’t think that clients should take it as read that agencies are good at strategy and creativity. The other weakness with workshops is that agencies are being judged on a single day’s thinking.

“In direct marketing, so much is about the implementation and the ability of the agency team to work together. Client-agency team dynamics are critical in advertising, but they are not the be-all and end-all,” she says.

Seligman agrees, adding: “Much of what agencies do is about the day-to-day grind of doing legal checks, proofing, and meeting deadlines. In those areas you need analytical and systematic people. These are not the kind of people who appeal to clients in a one-off meeting.

“An agency that pitches well is not necessarily the best one to work with. Even if you meet the people who will actually work on the account, you might quickly discover that the witty, intelligent, and creative presenter is an inadequate account handler who gets bored easily and has poor attention to detail.”

TMW new business director Richard Marshall points to what he calls “the phantom pitch”, citing the Ordnance Survey, which withdrew its corporate marketing tender at the last minute. “This left almost 30 agencies up in arms. They had prepared submissions only to be told a few days before the deadline that the process was being aborted,” he says.

He says another growing phenomenon is the highly prescriptive pitch, where there are “few or no meetings between the pitch document being issued and the pitch. The client doesn’t get to find out about the agency and how it works, and the agency doesn’t get to know the client and its real needs. Typically, there will will be a whole stream of agencies pitching and you can bet the response is due yesterday. These pitches are the hardest to win.”

Marshall believes, as do a number of other agency executives, that the “much-maligned ‘beauty parade'” is not obsolete.

However, he says: “They have to be modified in order to ensure that both parties get the best out of the process. We recently participated in the Guinness UDV pitch. It took place over a number of weeks, but factored in plenty of time for ’tissue meetings’ to see how thinking was being developed prior to the final presentation.

“It might be more timeconsuming for the client, but it scrutinises every aspect of the agency from strategic thinking to creative understanding and personal chemistry.”

One method of selection, which most agencies agree is useful, is actually giving the agency a small piece of work to do. Tequila/London chief executive Paul Biggins, whose agency was one of the lucky five in the Barclays pitch, believes this is a good way of assessing agencies. He says this, along with the workshop pitch, is part of the continued movement away from traditional pitching.

It is likely that pitches will continue to change. Even if the conventional one-hour presentation does not disappear altogether, clients and agencies will continue to press for new ways of finding the perfect partner. Asscher believes that the demands of clients will be the catalyst: “There is an opportunity at the moment because the rules of the game have changed. Clients are demanding integrated solutions. This is being driven by the convergence of technology and the proliferation of brands. And if clients are going to demand that agencies stop thinking in unconnected blocks, clients must give agencies access to their other communications agencies in ways they have not done before.”

This is what motivated Barclays’ innovative approach to a pitch. But as Marshall points out: “It’s early days for the workshop approach and it will be interesting to see how these new relationships settle down.”