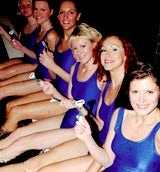 Gillette is understood to be reviewing its $600m (&£440m) global advertising account and is also planning to increase its ad spend this year.

The company’s chairman and chief executive, James Kilts, recently announced that Gillette is set to review all its external spending.

Gillette’s advertising spend, currently representing 5.8 per cent of sales, is low compared to competitors, according to Kilts, and far below the eight per cent Gillette was spending in the early-Nineties.

In the UK, Abbott Mead Vickers.BBDO and OMD UK handle creative and media work for shaving products and Duracell. Braun’s creative agency in the UK is Lowe Lintas &amp; Partners.

Gillette’s vice-president in charge of corporate communications Eric Kraus says: “We are reviewing all our costs and that could include a review of our ad spend. But this is not to say that we are dissatisfied with any of our existing agencies.”

Gillette is also believed to be launching a male version of its Venus razor, expected to be called Mars. The women’s product, launched in the UK this year, was backed with a global marketing push similar in scale to the &£625m launch of men’s razor Mach 3.

Kraus says: “We never comment on new product developments. When we launch a product, we do it on our timetable. This is nothing more than speculation.”

Scottish Courage has signed a sponsorship deal, understood to be worth Â£1m, with Kelvin MacKenzie’s TalkSport radio station.

Samsung Telecoms has appointed Stockport agency Hyde Burnett to handle its six-figure account and work on design, advertising and multimedia.

A leading affiliate-marketing specialist has restructured its business model in a bid to increase its appeal over conventional online advertising. US-based Commission Junction (CJ), which has been operating in the UK for the past six months, claims to be introducing a “new and innovative model for affiliate marketing that has never been done before”. Affiliate […]

Marketing is infuriatingly hard to articulate, and apt to languish unnoticed and unappreciated by those in harder-edged corporate roles but can make the difference between a corporation and its brands hobbling along the ground or soaring up into the stratosphere.