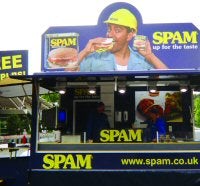 In South Korea people give their friends cans of Spam as a gift, while the Hawaiians eat on average four tins of the chopped pork and ham combination every year – more than any other nation.

Yet however nice it tastes, UK consumers cannot get the image of that famous Monty Python Vikings sketch or its role in the Second World War out of their minds when they think of Spam.

So what can a company do with a mature brand which has a high level of awareness but which UK shoppers have fallen out of love with – or are reluctant to try? One answer is to use field marketing and brand experience techniques that will literally put the product in the face of the consumer and, hopefully, show them what they are missing.

I2i Face to Face Marketing was asked by Hormel and licensed producer Tulip to organise a Spam roadshow. It visited 65 Sainsbury’s, Tesco, Asda and Somerfield stores where people were offered a choice of hot or cold Spam, recipe cards and money-off coupons.

Delivering Sales
More than 100,000 samples were distributed and the average sales uplift in each store was 656% during the week of the activity and 80% the week after. The sampling helped sales of Spam rise by 10% over the year.

Hormel general manager for Europe Swen Neufeldt says there were many negative perceptions of Spam which had to be conquered. “We knew Spam had a certain image and that the customer profile of the tin meats buyer is slightly older, but 70% of consumers in the UK have tried Spam,” he says. “We wanted to promote our key point of difference, which we believe is the taste, and this is where face-to-face marketing comes into its own.”

I2i managing director Bruce Burnett says the brief was to reach lapsed consumers and to convince younger people to try it for the first time. “This is all about literally putting a product in people’s mouths, and the element of surprise on their faces was amazing,” he says.

Of course Spam is not alone in using field marketing to reignite consumer interest. When Revlon wanted to convince younger consumers to buy its relaunched 1970s perfume Charlie it asked Link Communication to source promotional staff who could become modern Charlie Girls.

These women had to epitomise the brand values of sassy, funky and glamourous and then visit bars and clubs searching for other girls who fitted the perfume’s image but whose memory of Charlie is of their mother or auntie wearing it.

The Charlie Girls obtained contact details of the women they spoke to and got their permission to use their picture on the Charlie website. The Link team captured more than 1,000 photos, distributed 4,000 branded bangles and handed out 10,000 business cards.

“People did have fixed ideas about the brand so we had to get over that by focusing on the positive images of when these women were younger and when the Charlie scent was in the house,” says Link managing director Joel Kaufman. “Revlon wanted to create a living version of the brand values to appeal to modern professional females.”

Before other mature brands follow the example of Spam and Charlie they must be clear why sales may have stalled. Analysis by Sales Activation Solutions (SAS) reveals sampling activity can generate a sales uplift of between 200% and 700% in the first week, but field marketing will often only work in winning back consumers if there is something fresh to say.

Moment of Realisation
Often companies do not realise consumers have disengaged with their brand until it is too late. By this time sampling may be only part of the solution and investment in re-packaging and other marketing may be necessary to re-position a product in the eyes of the public and retailers.

For example, field marketing agency FDS’ in-store work for McVitie’s took place alongside an ad campaign in which McVitie’s joined forces with PG Tips and used comedian Peter Kay in a humorous sketch to recreate the traditional link between tea drinking and biscuit dunking.

David Foster, managing director at face-to-face marketing and retail trade support company Raisley, says problems can creep up on brands, and often the only way forward for a mature brand is to seek out new markets and consumers. “We study who is the target consumer, how the product’s market has changed and whether the brand should be going after a different type of customer. We then analyse how these new consumers access media messaging so we can sample them in the correct environment,” he says.

Two established brands that have tried to reinvent themselves are Lucozade and Del Monte.

Experiential agency Closer, part of Billington Cartmell, was involved in the Lara Croft campaign for Lucozade which moved the drink away from its medicinal past and firmly positioned it as an energy product. It arranged for a team of Lara look-alikes to perform athletic stunts in city centres, for example.

“Experiential field marketing gives you the cut-through you need to engage with consumers. It allows you the time to explain to people how a brand has changed,” says Closer managing director Belinda Chambers. 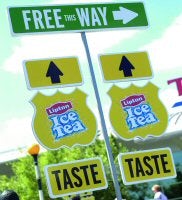 Smoothies not Trifle
The Del Monte activity took place during the summer and was organised by SAS and iD Live Brand Experience. The brand’s tinned fruits are well-known among older consumers so the brief was to show parents and young health-conscious people that eating tinned fruit is one way of meeting the recommended target of five pieces of fruit a day. The emphasis of the sampling and demonstrations was more on how the product could be used to make trendy fruit smoothies rather than grandma’s home-made trifles.

Even famous brand owners such as Heinz are adopting field marketing to win back lapsed buyers. Heinz asked experiential company Theatre to promote its relaunched soups range by explaining to shoppers how the ingredients had been improved, salt levels had been reduced and new varieties had been introduced.

“Heinz wanted to demonstrate how passionate it still is about soup and it was aware consumer tastes had changed. This type of activity provides a platform to communicate and reinforce brand messages,” says Theatre managing director Rob Quinn.

Theatre is no stranger to revitalising mature brands having worked with Lux soap last year. Unilever wanted to re-engage consumers with a product traditionally thought of as purely a soap bar but which is now available in a range of modern products such as a Lux shower gel.

It can be difficult convincing consumers to buy any product again or for the first time if they have a pre-conceived idea of how it will taste or feel and if they consider it to be unfashionable.

More Than Cold Tea
Lipton Ice Tea is desperate to be loved by British shoppers. The challenge for experiential agency RPM during a recent campaign at music festivals was to convince people the product does not taste like a cold cup of tea and that, in fact, if served chilled its different flavours offer a refreshing alternative to fizzy drinks.

“Lipton Ice Tea campaigns are always about not knocking something until you have tried it, and about a third of the brand’s marketing budget is spent on sampling near the point of purchase,” says account manager Michelle Wilson.

While brand managers struggle to find the best way to attract lapsed buyers there are some experts who argue they shouldn’t always bother. Robert East is a psychologist who moved into the marketing industry 25 years ago and now specialises in word of mouth marketing. He says there are many reasons why people fall out of love with a brand. They may have been deterred by a price increase, poor service, the attraction of a new player but they may have just grown out of a product.

“People won’t always go back to a brand however hard a company tries. Often they will have moved up the hierarchy in a category, or they no longer have the same personal needs,” says East.

Nevertheless, brand owners believe in their products and argue if they are attracting new consumers there is no reason why people who used to buy them should not do so again.