Online sales in the UK beauty market are growing rapidly and ecommerce looks set to have a decisive bearing on the fortunes of beauty brands in the lead up to Christmas, research suggests.

According to a study by market research company NPD Group, online sales of ‘prestige’ beauty products accounted for £137m in 2013, or 6.2 per cent of the total UK market. However, this represents year-on-year growth of 35 per cent compared to an uplift of only 2.1 per cent for offline sales.

Prestige beauty refers to high-end brands often found in department store concessions, such as Chanel, Dior or MAC Cosmetics. The total UK prestige beauty market was worth £2.2bn last year, up 5.6 per cent on 2012.

June Jensen, UK beauty director at NPD Group, says that although online sales are starting from a low base in the market, there is significant potential to grow. She points to brands such as Burberry and Benefit that have developed their social media strategies in recent years in order to engage consumers around exclusive beauty content and special offers.

“Online is another channel for manufacturers and retailers to engage consumers in their brand,” says Jensen. “Since blogging and social media became a big part of this world a few years ago, brands have been using a range of activities to attract people both online and offline.”

The research shows a continuation of this trend in the first half of this year, with online prestige beauty sales reaching £51.5m in the six months to 30 June 2014, up 25.7 per cent on the same period last year. Perfumes are helping to drive this growth, with online fragrance sales up 27 per cent in the period to £18m. This compares to 3.8 per cent growth for fragrance sales in bricks and mortar stores. 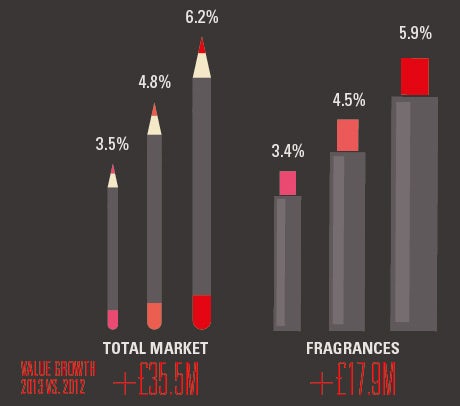 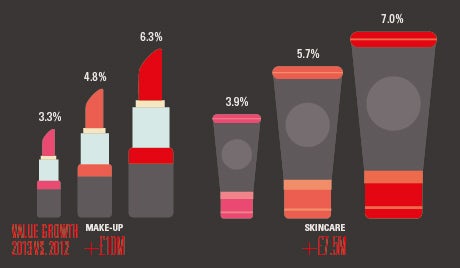 Fashion brand Burberry used online channels to promote its fragrance brand Brit Rhythm in campaigns aimed at both men and women over the past year. This includes crowdsourcing images on Instagram for an outdoor advertising campaign and encouraging people to sign up online to receive free product samples.

Jensen notes that the growth of online flash sales websites and department store click-and-collect services are also encouraging more people to buy online. “Online sales aren’t necessarily taking away from the high street, but adding to it,” she says.

Gift purchasing in the lead-up to Christmas is a particularly strong driver of online beauty sales, the research shows. Online sales in December 2013 accounted for more than one third (36 per cent) of total online beauty sales for the year, against 28.1 per cent of offline sales. 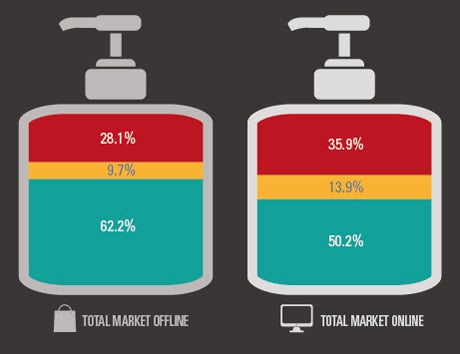 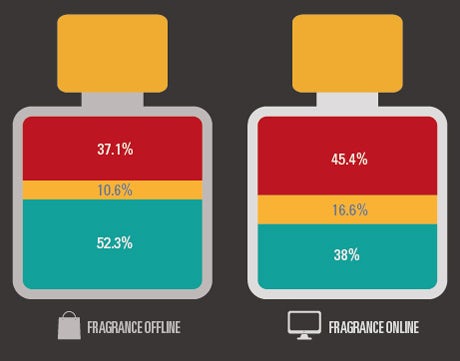 This trend is even more pronounced in the fragrance market, where nearly half of UK online sales (45 per cent) were made last December, compared to 37.1 per cent in bricks and mortar stores during the same month.

Mad Beauty, which describes itself as an “upper mid-tier” manufacturer of beauty products rather than a prestige brand, is similarly dependent on Christmas sales. The company, which makes cosmetic gift lines for a number of retail partners, generates most of its revenue in the final quarter of the year, according to director Trevor Cash (see Marketers’ Response).

He says the company’s ethos is to make quality products that are also quirky and fun. Mad Beauty’s retail partners include Asos, Tesco, Topshop and small gift shop and pharmacy chains. Last month, the company launched its first licensed products by using vintage designs from old Kellogg’s cereal boxes on its packaging.

Cash says the huge demand for beauty gifts in the run-up to Christmas puts pressure on the company to innovate each year, such as by launching new gifting concepts and designs. This could potentially include securing more brand licensing deals next year, he adds.

“We have made a rod for our own backs in that the pressure is now on to create new products and new twists and themes each year,” says Cash. 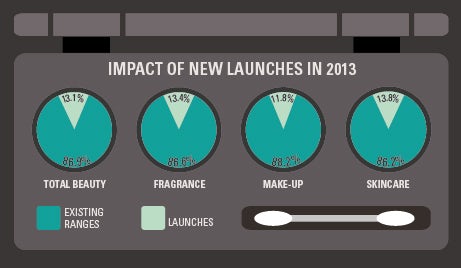 Christmas is also a significant trading period for men’s skincare brand Bulldog. The company increases its marketing activity in the final months of the year by running adverts in men’s publications and creating in-store displays to promote its gift boxes.

Co-founder Simon Duffy says the brand aims to set itself apart from rival skincare products by focusing on the quality of its Christmas gift packages. Bulldog is stocked in national chains including Boots, Tesco and Waitrose.

“You know exactly what you’re getting from a gift pack with a lot of brands,” suggests Duffy.

“It’s the same old stuff in a washbag: two shower gels and a deodorant. Bulldog has always prioritised telling a story and doing something a bit more interesting by investing in higher quality components and packs.”

Duffy claims that pre-orders for Bulldog gift packs this Christmas are already up by 300 per cent compared to last year. He believes the festive season is an important time for brands to innovate in their product development in order to attract new consumers.

“It helps to build brand awareness because you elevate your product from an everyday regime purchase to a gift,” he says. “The fact that it is given by a loved one and opened in front of the whole family on Christmas day is a special thing for a brand.”

Similar to other beauty and skincare brands, online sales only account for a small proportion of Bulldog’s total annual revenue. The company is revamping its website to improve the user experience, though Duffy says one of the primary reasons that people research the brand online is to learn more about its values and the ingredients in its products.

“It’s tough to make the distinction between offline and online because the best brands find that the two things work together in a symbiotic relationship,” he says.

“When it comes to beauty and skincare, people still want to smell and touch the products before they buy. It’s a very tactile thing.” 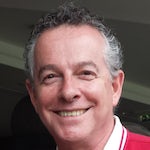 It’s a very busy time in the lead-up to Christmas. We probably generate around 40 per cent of our annual turnover in the final three and a half months of the year, which is challenging. We try to reduce that dependence by creating lines that are less Christmas-oriented but given our focus on cosmetic gifting, it’s still an important time of year.

Our business is moving further towards the mass market in terms of the retailers and supermarkets we supply, so we have to be more innovative at an earlier stage of the year because their lead times are that much longer than smaller chains. We believe presentation is everything and with the gifts we make we want to stand out as quirky and fun. 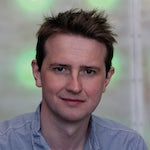 Christmas is a big opportunity for a challenger brand like us that is competing against much bigger companies on the shelf. It is an important time to be seen in the market because it’s such a busy time in-store. It is a chance to get into both existing and potentially new customers’ hands by doing something new and exciting.

Gifting is a big growth part of our business and we are going to be investing more in marketing during the lead-up to Christmas this year than we ever have before. It’s an all-year-round business and in fact we are already in talks with our retail partners about what will be on shelves in December 2015. That demonstrates the strategic role that gifting plays in this market and the size of the opportunity.

NPD Group partnered with retailers and manufacturers to track sales of beauty products in the UK. The data is further divided according to different product areas such as skincare and fragrance. NPD tracks both sales volumes and value figures across online and offline channels and makes year-on-year comparisons. 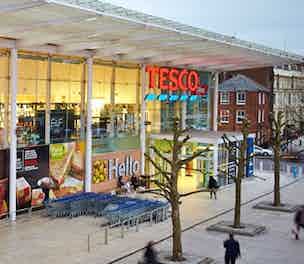 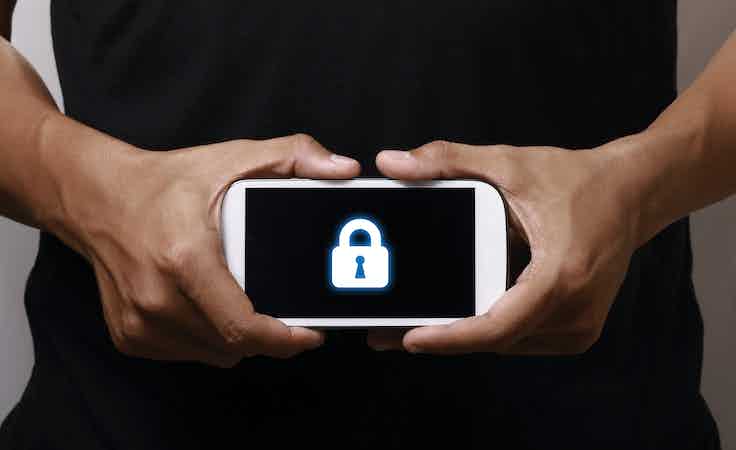 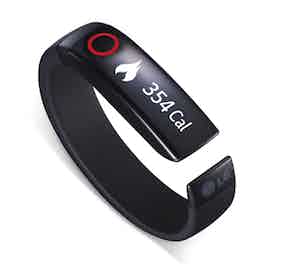 The wearable tech category is currently in the “Stone Age”, but analysts predict that entries into the market by big players such as Apple and improvements to the aesthetics and utility of current devices will see sales rocket by 2018.