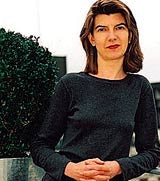 There’s been no shortage of press coverage of the “bursting of the dot-com bubble”- the most recent being EMAP’s culling of over 20 of its websites. There simply isn’t enough advertising revenue to support all these new media vehicles. Some initial schadenfreude among traditional media owners has given way to a general uneasiness at signs of an economic downturn.

The myth of the paradigm shift – where a wholesale shift in business models would create new revenue structures for media owners – has been exposed as wishful thinking. Advertising has always subsidised content, and that’s the basis on which media owners still operate.

As the economic environment becomes chillier, advertisers are looking harder at the contribution of every element in their communications mix. Suddenly, new media are having to play by the same rules as old media; generating revenue, staffed by experienced practitioners, and, most importantly, delivering what consumers actually want.

Advertisers’ initial stampede into new media was often driven by no more than “we want to do it because it’s new”, or “if we don’t we’ll be left behind”. So now, we are seeing a re-evaluation of the role of online media – and frequently a corresponding drop in ad spend.

But this backlash should not mean throwing out the baby with the proverbial bath water, and asking new media concerns to play by harsher rules than their older, established rivals. For example, the fashionable mantra that “banners don’t work” conceals the fact that, in terms of cost-per-exposure, they can be very cost-efficient – it’s their accountability that is causing them problems. Evaluation needs to be based on fair comparisons. For instance, what do we expect a banner to deliver compared with a targeted poster, or TV sponsorship? While the term “click-thru” has become devalued, relabelling it as a “warm lead from a potential customer actively seeking information about my product”, suddenly sounds a whole lot better – and carries more value.

Advertising is still a prerequisite for the survival of most media, but there is a different lesson to be learned for those seeking alternative sources of revenue.

New media alchemists have yet to turn the giving away of free content into gold, but that does not mean it will not happen – the experiments have already started. Two examples of free content that have become an integral part of many of our working lives, Mediaguardian.co.uk and FT.com, have owners with deep pockets and long-term attitudes.

But even Pearson, the Financial Times’ publisher, is scaling back its online investment.

A final thought: isn’t it about time we stopped calling new media new?

Coca-Cola has given McCann-Erickson the task of co-ordinating a major global marketing blitz this summer to rejuvenate its flagship brand. The two ads will have a “feel-good” theme, and will be adapted to the company’s “think local act local” strategy. They will break worldwide at the end of this month. The ads will replace the […]