An already established player in the US market, Glassdoor launched last year in the UK and says it has grown by 100% in its first year, with brands such as Iceland, Nationwide and Three already among its paying customers. The website is generating over one million unique hits per month.

The service works by allowing any consumer to anonymously post a review of their experience as an employee in a role at a business. The reviews are subsequently stored and logged, with brands accumulating 1-5 star scores for an overall average rating. Review categories include views on the CEO, salary opportunities and future business outlook.

It all sounds a little like a brand manager’s worst nightmare.

She adds: “But over the last year, that attitude has changed quite dramatically and senior executives are now realising this is a tool to help improve their business and work out where things are going right or wrong.”

Glassdoor generates money through its job listings and by offering brands premium memberships where they can upgrade the look of their pages and communicate key employee messages.

Web ads and the use of content marketing strategies, such as regular events and webinars on subjects such as employee engagement, are also a source of income. Glassdoor also recently utilised its data to reveal that marketing manager was the UK’s most satisfying job.

“Of course, we want to become the number one jobs site in every market, but first and foremost we want to ensure consumers are being given valuable information so they don’t join a company where they’ll have a negative experience,” he explains.

“In the past, people solely relied on word of mouth when looking at companies for employment – we’re changing things.”

With around 2,000 brands signed up to Glassdoor’s premium service, there have already been 25,000 UK businesses subject to anonymous reviews. Globally – Glassdoor operates websites for the US, India, Germany, Canada, Australia and France as well – that number rises to 340,000.

So are disgruntled employees not a concern?

“You need to list pros and cons when making a review so there’s a balance to it,” adds Wiggins, who says Glassdoor’s US-based content moderators ensure fake or forged reviews don’t get published.

There is also a flag option, which if clicked, prompts Glassdoor to investigate any reports on controversial published ratings. 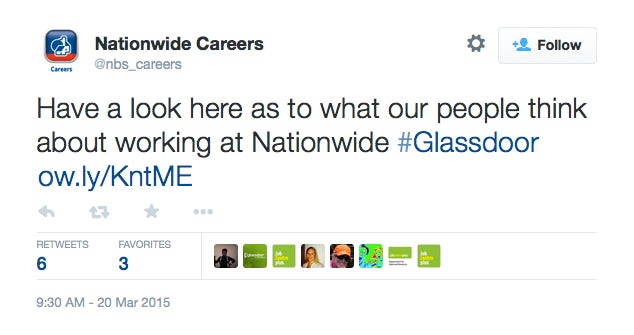 Wiggins says that negative reviews are not as common as people expect, with the average score for businesses 3.2 out of 5, and 70% of reviewers ‘ok or satisfied’ with their jobs.

Although it’s still early days for Glassdoor in the UK market, there is evidence of major brands taking it seriously. British bank Nationwide (above), in particular, has heavily promoted its average Glassdoor rating of 3.5/5 over Twitter.

“This can become like a five star critics rating on a movie poster,” adds Wiggins. “I think it can become ubiquitous for Brits, the standard way people look and apply for jobs.”

“We want to make sure brands stay on their toes and treat employees well as ultimately if their Glassdoor rating slips then they will lose sales,” she explains.

“People are increasingly making purchase decisions based on how big businesses treat their staff in the same way they’ll avoid a restaraunt with a poor review. This can be like Tripadvisor for the jobs industry.” 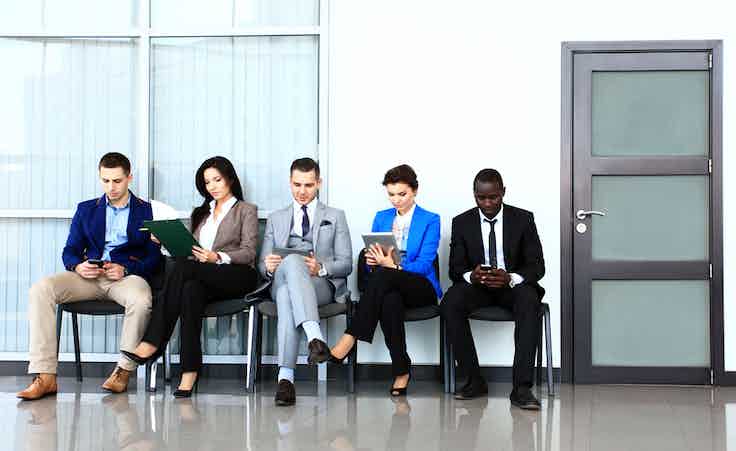 Good news marketers… you’re in the right industry as marketing manager has been crowned the best job in the UK, according to a new list compiled by jobs website Glassdoor.

I recently presented a paper to the company board about the need to invest more in our brand.