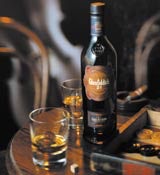 He will report to William Grant chief executive Roland van Bommel and will be responsible for developing a global marketing strategy for the brand – famous for its long-standing stag icon. Glenfiddich claims to be the biggest selling single malt Scotch whisky globally.

Bommel says: “His appointment comes as we focus efforts on building the value and equity of our portfolio of brands by strengthening our marketing department.”

Sturgeon joins William Grant after seven years at drinks giant Diageo, where he held a number of senior roles, including brand director for Guinness. Previously, he worked as the director of marketing strategy and new media for the National Magazine Company.

The global advertising for Glenfiddich is handled by US-based agency Merkley &amp; Partners, part of the Omnicom Group.

The advertising business for the brand was previously split between Vallance Carruthers Coleman Priest (VCCP) and the Omnicom agency, but was scooped by Merkley &amp; Partners last year following a roster review (MW July 8, 2004).