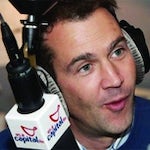 He will replace Paul Jackson, who is emigrating to Australia to join Lachlan Murdoch’s DMG radio group.

Brownlow steps up from his role as Galaxy programming director for Manchester and the north.

He will be responsible for all programming output at Capital FM and will report to director of broadcasting Richard Park.

Global will be hoping Capital’s fortunes will improve in the second half of the year.

The station saw its average weekly audience drop 1.6% to 1.92 million in the second quarter of the year, according to Rajar.

Its share of London’s commercial radio market also dropped, down to 4.9% from 6% in the first quarter.

It currently has the third largest weekly audience among London’s commercial radio stations behind sister station Heart and Bauer’s Magic 105.4.

He was responsible for temporarily reuniting Johnny Vaughan and Denise van Outen on the station’s breakfast show in 2008 before van Outen quit after just six months.

Her replacement, Lisa Snowdon has forged a successful partnership with Vaughan.

The duo retained their status as the top commercial breakfast draw in the capital in the second quarter with an average of 1.12 million listeners tuning in every day.