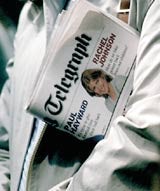 Broadsheets, under pressure from falling circulation and revenues, are turning to editorial makeovers to rejuvenate themselves.

Plummeting advertising spend and declining circulation figures have put pressure on the broadsheet market, but have not suppressed the newspapers’ spirit: they have come out fighting, with a number of editorial makeovers.

The Daily Telegraph, The Guardian and The Independent on Sunday have all announced recent shake-ups in editorial content in an effort to woo readers and increase buying frequency among customers. The Telegraph, for instance, is investing £8m in its branding push, including a televised ad campaign using the strapline “Read a bestseller every day”.

And the Financial Times is to be revamped in April, with the introduction of a Saturday magazine and other changes to its editorial content following a fall in advertising revenue of 23 per cent and a circulation decline of six per cent.

The changes are arguably well-timed. Consumers hungry for news on the crisis in the Middle East will be wooed, theoretically, by the add-on benefits of new-look packages.

Daily net circulation for the national broadsheet market for August 2002 to January 2003 dropped 4.85 per cent (Audit Bureau of Circulations) compared with the same period last year,which experienced a rise of 0.32 per cent on the previous year, partly attributable to the desire for news following September 11, 2001.

In contrast, tabloid circulation has held up. Total average daily net circulation for August 2002 to January 2003 rose 2.29 per cent year on year in this sector.

Independent News &amp; Media chief executive Ivan Fallon says: “The underlying problem for broadsheets is the low level of profitability we are experiencing.” Primarily, this has been caused by falling ad spend, especially in those traditionally strong areas for the quality press, such as recruitment and financial services. But circulation revenue has also been affected because of a reduction in the number of independent newsagents offering home delivery of newspapers.

According to the National Federation of Newsagents, the broadsheet market benefits most from distribution via home delivery. Furthermore, there is concern that consumers are time-pressured and are therefore buying fewer newspapers, preferring instead to get their news from the internet while at work.

Guardian Newspapers director Marc Sands says that The Guardian, which had a January circulation of 409,569, is aiming to increase the frequency of purchase across the week by introducing a daily Media Guardian page and world news digest page.

The Daily Telegraph, which has seen its circulation fall below the 1 million mark with the removal of bulk sales, is changing its front-page layout and masthead and is beefing up its Saturday Telegraph Magazine, with the home section becoming Telegraph Food And Home.

Group marketing director Mark Dixon explains that the supporting branding campaign is intended to establish that the newspaper is the number-one selling daily broadsheet in the minds of consumers, and to attract a younger readership. However, “young” for the Telegraph means 34to 45-year-olds – the newspaper is not chasing the mid-20s market yet.

The Independent On Sunday is responding to readers’ demands for more in-depth arts coverage with the introduction of its Talk of The Town magazine last weekend, albeit in the Carlton region only. Fallon says: “Increasingly, as other broadsheets move downmarket and become mass-market, especially on a Sunday, we are deliberately pushing upmarket. We think it’s a good position for our paper to take.”

The notable exception to the current round of broadsheet makeovers is The Times. The Sunday Times newspaper changed some of its editorial sections last year, relaunching its Style magazine last September (MW June 27, 2002). Insiders do not expect to see any more shake-ups until this September, although some tactical advertising may materialise to counter The Daily Telegraph’s campaign.

But there is a worry among media buyers that an increasing number of supplements may not prove to their clients’ benefit. Manning Gottlieb OMD press director Mark Gallagher admits new sections might provide new advertising opportunities within a newspaper, but asks whether they will “increase the time spent reading the total package or decrease it”.

The newspapers counter this by saying they are providing a newspaper for the whole household, with men picking up motor and sports coverage, while the interiors and fashion sections target women.

Experts say that the future is not necessarily bleak for broadsheets. They benefited from a price hike last year without any sudden fall in circulation and Fallon believes that there is scope for increasing cover prices again.

As for advertising, buyers say that the sales teams are becoming more imaginative in providing client solutions. The recently formed Newspaper Marketing Agency, headed by Maureen Duffy, is also expected to help boost ad sales by promoting the national newspaper medium to clients.

Numis Securities media director Lorna Tilbian points out that less advertising means a reduction in newsprint costs, which are estimated to account for about 20 per cent of the production cost of a newspaper.

Zenith Optimedia press director Olly Joyce suggests that in the longer term, the increasing quality of supplements may give newspapers the potential to poach magazine readers, but he adds that it is unlikely that newspapers would want a battle with magazine publishers at this point.

With a war around the corner, the broadsheet sector can only benefit as the public turns to heavyweight newspapers for analysis and context. But whether those consumers will remain loyal and frequent readers in the long term is debatable.