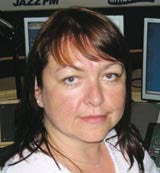 She will relaunch Jazz FM as Smooth FM this June following the successful rebranding of the North-west station as Smooth FM, early last year. The group has already appointed Clear Marketing, with which Dickinson has worked on the Real network, to handle the launch campaign (MW March 3). GMG also works with Brilliant Media and Thomas Media Consultancy.